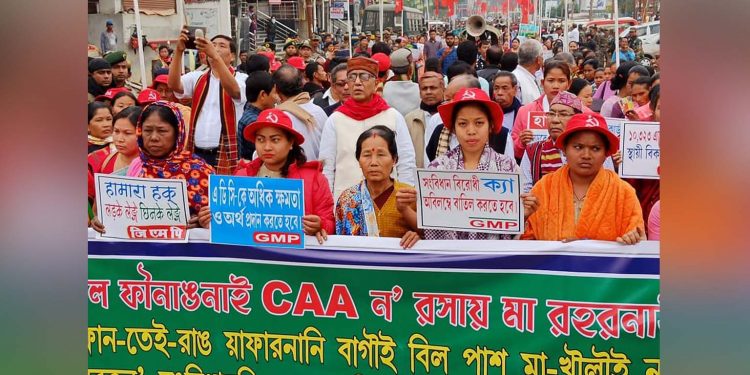 The leaders appealed the participants to fight unitedly and urged people from across tribal and non-tribal communities come together in order to thwart CAA.

The rally, which was organised on basis of 18-point issues, included the immediate demand to withdraw CAA, to yield more power to Tripura ADC and inclusion of Kokborok in 8th Schedule of the Constitution.

TRUGMP president Jitendra Choudhury, launching a scathing attack against the Centre over CAA, said, “Every half-an-hour one farmer commits suicide in India.”

“Under the BJP rule, most of the farmers are forced to leave farming and become wage labourers and the people from the lower-income level of the society are becoming weaker day-by-day,” he added.

“Instead of thinking for the welfare of its own people, the Centre is busy protecting the rights of the migrants from the neighbouring countries,” he added.

“The Citizenship (Amendment) Act (CAA) is anti-secular and it should be scrapped immediately,” he further added.

In another rally, Tripura royal scion Pradyot Debbarma appealed the supporters to build the unified struggle against CAA.

The rally will travel to each and every sixty assembly constituencies of Tripura and sensitise people, especially tribals, against CAA.