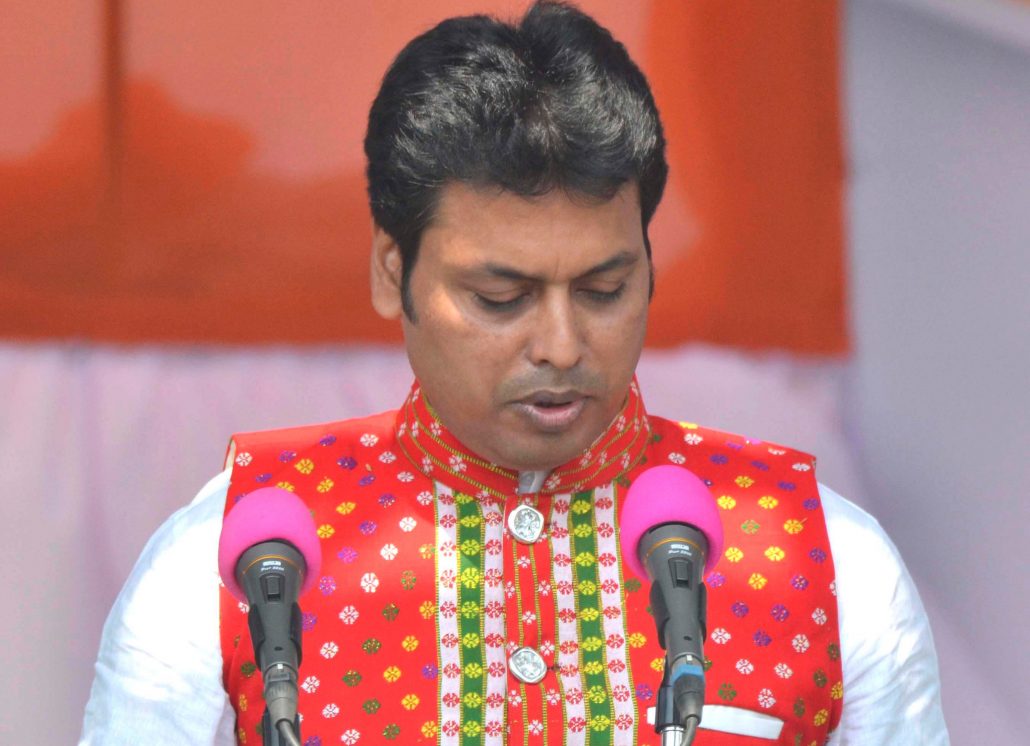 A nine-member BJP-led government headed by Chief Minister Biplab Kumar Deb on Friday assumed office in Tripura along with its ally IPFT, ending 25 long years of Left rule and leaving the once seemingly invincible Marxists in power only in Kerala.

Governor Tathagata Roy administered the oath of office and secrecy at the Assam Rifles ground to the 48-year-old Deb, followed by Deputy Chief Minister Jishnu Dev Barman and seven other Cabinet ministers.

“Three other ministers will be included in the ministry soon,” a Bharatiya Janata Party (BJP) leader said.

New minister Debbarma, a former central government officer, is the IPFT President while Jamatia is General Secretary of the tribal-based party, which since 2009 has been agitating to upgrade the Tripura Tribal Areas Autonomous District Council areas as a full-fledged state.

The BJP, the Communist Party of India-Marxist (CPI-M)-led Left Front and the Congress opposed the statehood demand.

Chief Minister Deb, the incumbent Tripura BJP President, and all his Cabinet colleagues became ministers for the first time in a border state where for decades the BJP virtually did not exist.

After the swearing-in, the Chief Minister and his cabinet colleagues went to the Civil Secretariat to their respective offices.

Left Front leaders boycotted the ceremony to protest against what they said was large-scale violence in Tripura after the Assembly elections.

In the February 18 polls, the BJP won 35 seats in the 60-member Assembly and the IPFT eight. The CPI-M got 16 seats while Left Front partners — Communist Party of India, Forward Bloc and Revolutionary Socialist Party — drew a blank. So did the Congress.

Balloting in Charilam constituency could not be held after the death of the CPI-M candidate.