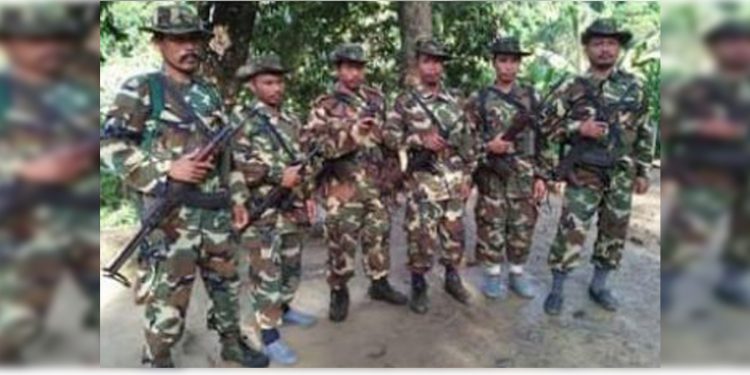 A total of 43 cadres, belonging to the National Liberation Front of Tripura (NLFT) were arrested by Tripura Police within seven months from November 2020 to May 2021.

Informing this, high-level sources in Tripura Police revealed that in the seven-month period, 19 other cadres of NLFT surrendered before Tripura Police in this period while around 20 youths joined the outfit.

According to reports, a faction of NLFT, headed by its self-styled commander Dilip Debbarma, is making attempts to restart its operation in Tripura.

The outfit is operating from neighbouring Bangladesh.

Sources told Northeast Now that of the total 43 militant cadres, arrested by Tripura Police, a total of 11 cadres were arrested in the month of January 2021.

The NLFT remained quite dormant till the end of 2019. But the attempt of the revival of the outfit started at the beginning of 2020.

The Special Branch of Tripura Police became alert as it received the early warning from its network of intelligence.

“Since then, this organization in co-ordination with the district police and Tripura State Rifles (TSR) put joint efforts to foil the survival effort of the remaining faction of the NLFT,” sources said.

“Several intelligence-based operations were launched and spectacular achievements were achieved in foiling the survival bid of the extremism,” sources added.

Sources revealed that in the period from November 2020 to May 2021, the Tripura Police was able to seize two 9 mm pistols, 2 magazines, 17 RDS and a cash amount of Rs 15 lakh from the possession of the arrested militant cadres.

While the police claim that they have achieved success in neutralizing the NLFT, the opposition party CPI(M) has alleged that the banned outfit has started recruiting unemployed tribal youths in parts of Kanchanpur and Gandacherra sub-divisions.

Regarding the allegation, a police official on condition of anonymity said the incidents of violence with the involvement of extremists have also shown a sharp decline and the numbers of killing by extremists and kidnapping cases have also come down substantially.

However, in the last two months, more than 20 youths from Kanchanpur, Chamanu, Gandacherra, Raisyabari joined the NLFT, sources said.

“As per available inputs, the insurgents, who have surrendered in the recent past, are not satisfied with the rehabilitation policy being implemented in the state. So, many surrendered militants may again opt to rejoin the insurgent groups,” sources said.

“Though the insurgency groups are facing paucity of funds, which is severely hampering their operational capabilities, they are in search of new sources of funds,” sources said.

“It is learnt that the insurgent groups have identified some businessmen, ration dealers and contractors in some specific locations on the bordering areas of the state as potential targets for fund collection or extortion and they have engaged over-ground workers to execute such work,” sources further said.