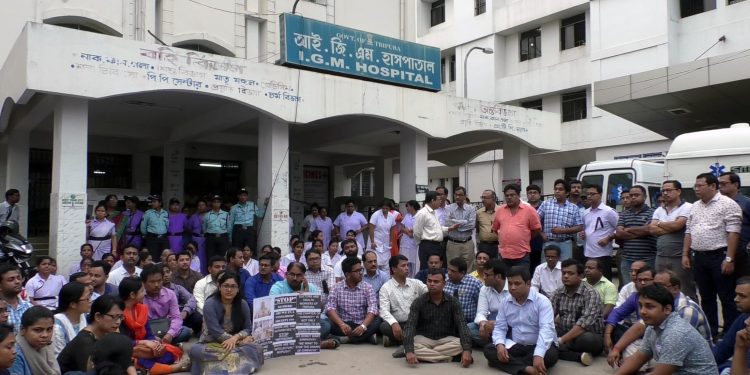 Despite all assurances by the Tripura chief minister Biplab Kumar Deb on Friday, during an urgent press conference, to take strong legal action against those involved in repeated manhandling of doctors and medical staffs and set up permanent police pickets in the hospitals, Deb’s cabinet colleague, health minister Sudip Roy Barman reacted strongly at the wake of the incident and declared surrendering his own police escort.

The health minister through a letter to the chief minister as well as the home minister, expressed that he had failed to protect the ‘members of his health family’ being the ‘head of the family’ and on that moral ground, he is surrendering his police escorts until all involved in the assault of the doctors are arrested and adequate police security is provided, round the clock, in all major hospitals across the state.

The health minister mentioned in the letter that the repeated assault on the doctors ‘is sending a negative signal in the minds of the fresh graduates and in the coming days they might opt out of the state of Tripura’.

He also stated that he was ‘shocked to see that no arrests of the hooligans/perpetrators involved in the various incidents have been made till date’. 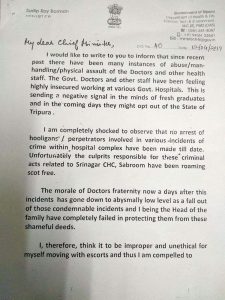 Barman then noted in the letter than the morale of the doctors’ fraternity post these incidents has gone down to an ‘abysmally low level’.

He was requested the chief minister that all perpetrators behind the barbaric acts against the doctors in the past one year are taken to task. 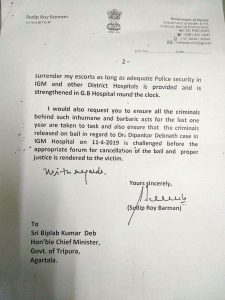 He also sought the cancellation of bail against the accused who assaulted the doctor on-duty Dipankar Debnath of Indira Gandhi Memorial (IGM) hospital on Friday and that ‘proper justice is rendered to the victim’.

The letter was made available in the public domain and showcased yet another sign of an inner fight within the BJP government which, till now, was only heard in whispers.

At a time when the whole state is charged up in the election wave, the surrendering of police escort by a minister will, undoubtedly, be an embarrassment for the BJP-IPFT government of Tripura exposing signs of an inner conflict among the ministers and simultaneously add fuel to the doctor and health staff agitation.

In the meantime, during a late night press conference around Friday midnight, the state Law Minister Ratan Lal Nath informed that for the first time in history the Tripura High court had set up a proceeding after 9 PM on the urge of the Advocate General’s and has cancelled the previous anticipatory bail order of those involved in physically assaulting an on duty doctor Debnath.

Adding to the Chief Minister’s statement, Nath said that the present government’s message is clear and that anyone who takes law in his hand would not be spared.

He also urged the doctors and the medical staff to withdraw their agitation.

It is to be noted that Debnath was kidnapped, on the election day – April 11, during the wee hours by family members of the women who died in the labour room of the hospital.

The woman, reportedly, had died due to cardiac arrest.

Later, the police found Debnath lying on the road in an unconscious condition with cut marks on his body at an area nearby the hospital.

Taking advantage of the situation the opposition party CPI(M) leaders also visited the hospital to gauge the condition of the doctor in the trauma centre.

Speaking to reporters, CPI(M) MP Sankar Prashad Datta condemned the incident and said that the incident yet again shows a total state of lawlessness going on in Tripura since the BJP-IPFT came to power 13 months back.