The council has decided to raise the levy of tax from 12 per cent to 18 per cent on cell phones.

A directive has been issued to all the telecom operators in India by the Department of Telecom (DoT), which states that all the operators in India have to start issuing 13-digit mobile numbers to customer starting from July 1 later this year.

The report which was confirmed by a senior BSNL official, said that the decision was taken to improve network connectivity and provide better security features to the users.

All the existing mobile numbers will have to be ported from 10-digit to 13-digit starting from October 1, 2018.

“The decision to implement the 13 digit M2M (Machine-to-Machine) numbering plan has been taken keeping in mind the security concerns of the users of various telecom services. The numbering plan will be implemented from July 1.

“From that day onwards, all new mobile connections will be allocated 13 digit numbers. Migration of existing 10 digit phone numbers to 13 digit phone numbers will start of October 1, 2018 and will have to be completed by December 31, 2018,” the senior official said, quoting from the report. 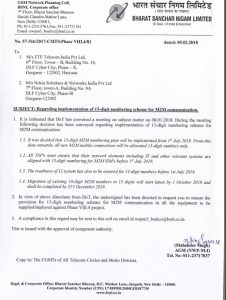 If implemented, India will become the only country with the longest phone numbers, with China coming in at a close second with 11 digit phone numbers.

The Ministry of Communication in a letter to the Telecom Regulatory Authority of India (TRAI) said that the 13-digit numbering system has been approved for SIM-based M2M devices, which would enable all sensors and devices to communicate with other internet based devices and systems.

All telecom service providers have been directed by the Ministry to ensure that their network services are aligned with the 13-digit numbering system before July 1 next.

It would, however, pose to be a big problem with the 13-digit number as it would be almost impossible for a person to remember it, also leading to massive dislocation across various sectors such as banks where provisions have been made to capture only 10-digit mobile numbers.

UDAN 4.0: Get ready to fly from Dibrugarh in Upper Assam to Shillong