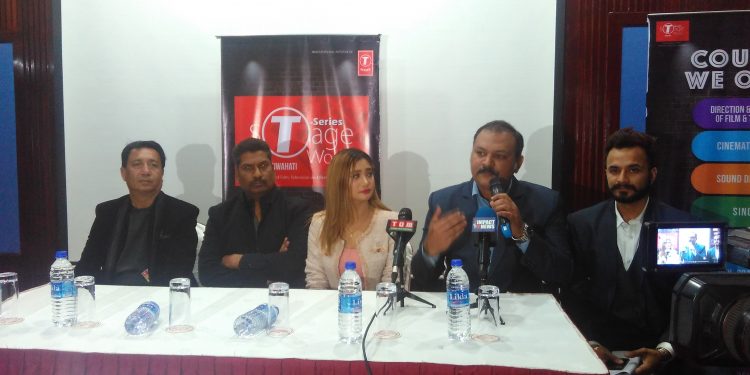 T-Series, India’s largest music label and production house is making all out effort to launch a talent hunt programme in the Northeast to hone the talents in performing arts and make world class feature films.

The talent hunt will be launched on acting, singing and modeling across the region starting from Assam and followed by Nagaland and Manipur.

This was conveyed by chief executive officer (CEO) Subadeep Shah of the newly opened T-Series film academy and PRO Piyush Sharma of T-Series stageworks, Guwahati while announcing various courses on performing arts at their academy during a press conference in Imphal on Tuesday.

“Even if you have good actors or directors you may not get the required results unless you’ve good equipment. So the language will not be a barrier, if you are well equipped (for it),” says CEO Subadeep.

“We’re investing lot of things to enhance the required results,” he added.

Informing about the film academy, Subadeep said T-Series has further ventured into training the young talents in media and entertainment through its T-Series Academy in association with Don Bosco College Maram in Manipur’s Senapati district.

He added that Manipur and Northeast students will get the benefit of special fee structure.

PRO Piyush also informed that T-Series which has a 35 per cent share of the Indian music market, will also provide scholarship to the winners of the upcoming talent hunt which is scheduled to hold its grand finale this year end.

Renowned cinematographer and former president of Film Forum Manipur, L Surjakanta who took part in the day’s interaction also expressed the need to upgrade the various forms of technologies used in the film making as the generation is passing through a digital era.

Sharing a similar feeling, popular actor Soma Laishram said opening of the T-Series stageworks academy in the region would certainly provide a better platform for the performing arts talents of the State.