A protest a rally being taken out against Bangladeshi nationals illegally staying in Assam, in Guwahati. (File image)

At a time when entire Northeast is agitating against BJP’s move to push for the Citizenship (Amendment) Bill 2016, Swarajya Magazine, a right-wing publication has blamed the Assamese people for the ‘influx’ from Bangladesh.

Journalist, Jaideep Mazumdar in his article titled, ‘Assamese Must Ask Themselves: Who Allowed Millions of Bangladeshis to Settle in the State?’ said this, which was published by the digital version of the magazine. 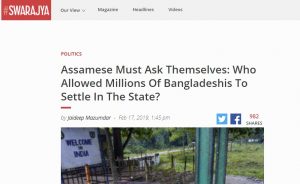 Mazumdar also said that the ‘successive governments in Assam (mostly Congress governments) encouraged this influx in order to create vote banks for their petty political gains’ and pointed out that ‘it is no secret that the Congress created, nurtured and gained from these vote banks (of poor Muslim immigrants). The Congress leaders were all Assamese. The indigenous people of Assam need to hold their past rulers responsible for the fast-changing demography of their State and the perils that this poses for them.’

The magazine which also has a print edition is known to be close to the BJP quarters.

“Muslims are the fastest growing community in Assam and it is widely estimated that by the middle of the current century, Assam will become a Muslim-majority state. And most of these Muslims will not only be of Bangladeshi origin, but also poor and a highly-radicalized (by Salafi preachers) lot,” he said.

He also blamed that while the Bangladeshis provided cheap labour they were employed by the Assamese. “Even today, most masons and construction workers, rickshaw pullers and landless farmers in Assam are of Bangladeshi origin. And the Assamese continue to patronize them while, at the same time, blaming the Union government for not doing anything to stop the illegal influx and drive out the infiltrators,” he said.

“Indigenous Assamese landlords let out their farmlands to the illegal Bangladeshi immigrants or employed them as cheap labour at subsistence wages, and Assamese businessmen and factory owners did the same. The Assamese prefers to employ a Bangladeshi at low wages rather than a labourer from another part of the country. That is why Hindi-speaking labourers have been replaced by Bangladeshis in Assam. All of them – the Assamese landlord, businessman, factory owner and the ordinary Assamese patronizing a Bangladeshi labourer, mason, vegetable seller, rickshaw puller and the like are primarily responsible for Assam being overrun by Bangladeshi immigrants,” Mazumdar said in his article.

Urging the people of Assam to ask themselves who is responsible for the influx, Mazumdar said that the indigenous people of Assam have to ponder over these questions and come up with honest answers.

“The Assamese have to take primary responsibility for what has happened to Assam. And then take corrective action. Blaming New Delhi and looking to the Union government for solutions is not going to help,” Mazumdar concluded.