Vehicles and wheelchairs being arranged for disabled voters 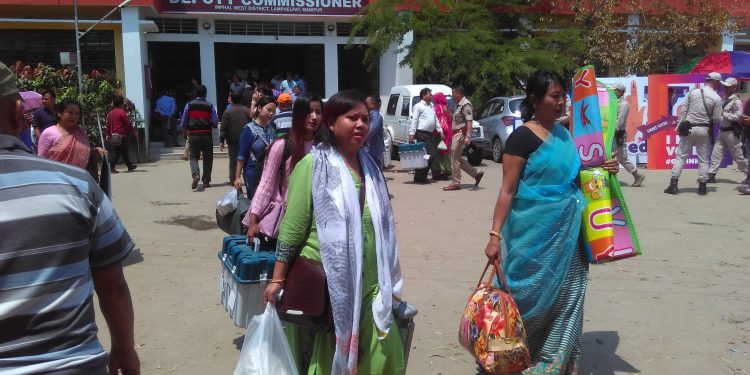 Polling parties in Manipur have left for their respective polling stations for the second phase polling for the Inner Manipur parliamentary constituency.

To encourage and celebrate the festival of democracy, key chains and badges will be given to the first 50 voters and first time voters, respectively, at each polling station.

Special rooms will be provided to lactating mothers and special facilities for the senior citizens. The Chief Electoral Officer (CEO) of Manipur, PK Singh, informed media persons that the first 50 voters will be given gifts from the CEO office during the polling day,

Block-level officers will be provided an amount of Rs 1,000 each so as to provide potable drinking water at the polling stations for the voters.

For the disabled, five vehicles each along with wheel chairs are reserved in each polling station to ensure pick up and drop facilities for the people who are visually impaired and electors with locomotive disabilities.

They will be assisted by young volunteers who are under 18 years of age and the volunteers will be paid Rs 200 each as an incentive for their service rendered on the poll day.

Presiding officers have been instructed to take selfies with the senior citizens and share the photograph in the WhatsApp group of the Assistant Returning Officers.

Before the polling begins at 7 am tomorrow, the polling team and polling agents will conduct a mock poll at 6 am to ensure that all the EVMs and Voter Verifiable Paper Audit Trails (VVPATs) are “fully functional”.

To ensure hassle-free polling, sector officers will carry extra EVMs and other requirements accompanied by the Bell Engineers.