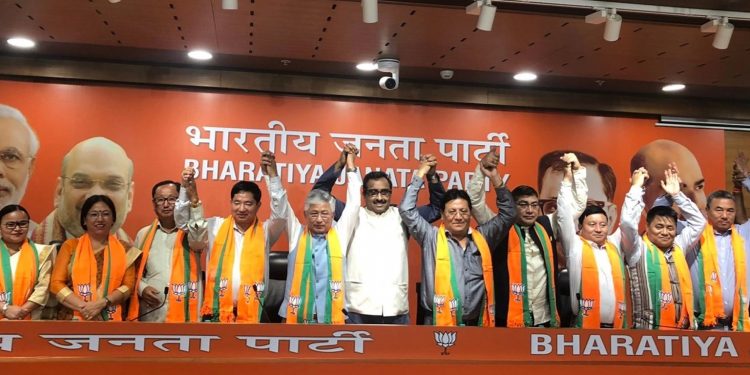 Joining of SDF legislators to BJP. Image credit: The Hindu

Sikkim Subject Committee (SSC) has asserted that the recent switching sides of Sikkim Democratic Front (SDF) legislators to BJP and SKM was totally against the interest and hope and aspiration of the people of Sikkim.

The organisation has decided to file a case against the defected MLAs in the High Court of Sikkim.

Addressing a press conference in Gangtok on Friday, SSC vice-convener Nawin Kiran Pradhan stated that the democracy was under attack and in total danger due to the recent defection of SDF legislators.

Pradhan stated that the people had a big expectation by bringing the change in the State and termed the recent political development as disappointing.

“This has saddened the people of the state. This horse-trading is a betrayal to the people and an attack on democracy,” Pradhan further said.

He further said that SDF had promised to deliver its responsibility of a strong opposition after the election result but the party was unable to sustain even for three months.

“If this is the system after the election then there is no use to conduct the election,” he said.

“It is high time for the people to come out against such practice and such defected legislators must not be spared,” Pradhan added.

He also asserted that the SDF president should speak on this issue.

He also questioned SKM on taking two legislators of SDF party while it already has the majority to form the government.

“When in opposition, SKM was against defection. So how could they accept the two legislators?” he questioned.

He further argued that presently there was no provision that legislators of a party can join another party with 2/3 majority.

“There was only provision to merge the party that also in the consultation of every party member,” he further said.