Sikkim school to represent India at Robotex Asia in China 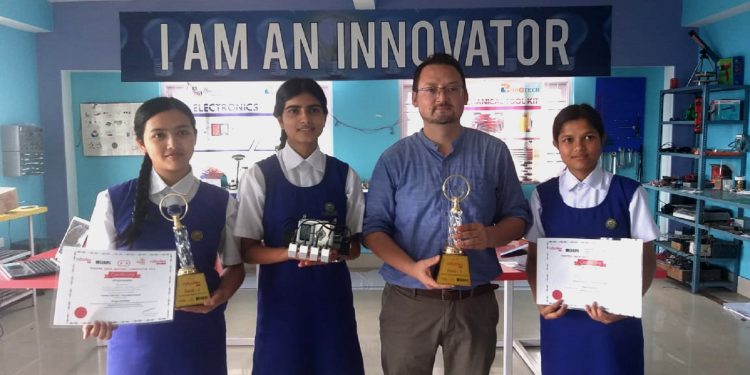 A team from Sikkim‘s Paljor Namgyal Girls Senior Secondary School (PNGSSS) will be representing India in Robotex Asia to be held from August 16 to 19 at Shanghai in China.

They will be accompanied by their mentor, Ivan D Lepcha, who is also the head of the physics department of PNGSSS, as the team coach.

The same team will also represent the country in Robotex International to be held in November at Tallinn in Estonia, Europe.

They are members of the Lego Line Follower Team from PNGSSS, who stood first at the Robotex National held on July 27 and 28 in Ahmedabad.

Victory in Allahabad made them eligible to represent the country in their respective category in Robotex Asia and Robotex International.

Speaking to media in Gangtok on Monday, Lego Line Follower team members expressed their happiness and satisfaction on standing first at the national level competition.

“We are very happy and excited on securing the first position in Robotex National,” the team said.

“It is a very happy and proud moment for us to represent our School, State and the Country in the international arena,” the trio expressed.

“Our coach, Ivan sir always trained us to focus on the performance of the robot and not in the complexity of its mechanical design,” the team said.

“The input provided by sir has been very helpful,” the team added.

Mentor and coach Ivan D Lepcha stated that it was a proud moment for the school to represent the entire student community of Sikkim at the international arena.

He said that PNG School was among few schools in the country were ATL labs were set up for the first time in 2017.

“Our lab is open not only for PNG School student but interested students from nearby schools,” he said.

Presently there were around 35 ATL labs Sikkim.