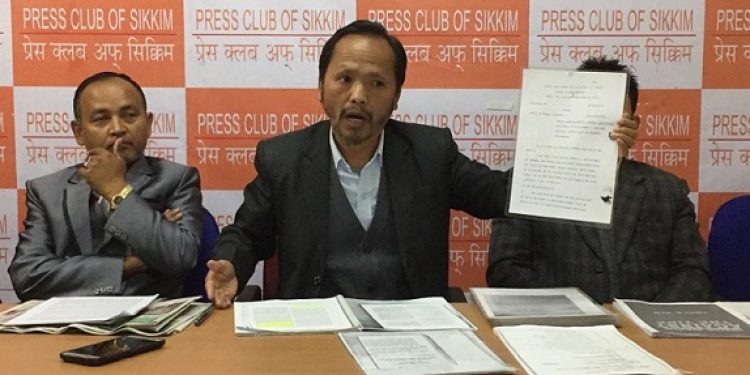 Sikkim Republican Party (SRP) has stressed that the initiative of Hamro Sikkim Party (HSP) of approaching the Supreme Court to remove immigrants tag from Sikkimese Nepalis was just like ‘painkiller’ for the wound of Sikkimese Nepalis.

The party argued that the approaching the apex court would not get the roots of this issue as the court had given the judgement on the basis of arguments and opinion placed by the respondents.

Addressing a press conference here on Saturday, SRP president KB Rai stated that if HSP was sincere and honest in its initiative in this issue in the interest of 80% of Sikkimese Nepalis, then RSP heartily welcomes HSP initiative.

However, he stated that senior leaders of the State, who were in HSP at present have not taken any initiative on this issue so far and now they suddenly move to the Supreme Court raise some doubts.

He mentioned that if HSP was really serious about the matter then it should go to the roots and SRP was ready to provide all possible support otherwise it was just a drama.

He also asserted that if HSP was sincere on the matter then it should support the case filed by Sikkim Gorkha Jagaran Sangh on the same in the State High Court.

“The Supreme Court had given this judgement due to faults of our leaders so our leaders need to correct this fault. Such judgement came out due to improper history and facts submitted on Sikkimese Nepali community,” Rai said.

He also mentioned that it was important for the people to understand that the Supreme Court given the judgement after hearing the arguments and counter affidavits presented by the State and Central governments.

Rai also mentioned that two counter-affidavits were submitted by Sikkim Government on this case and on the basis of these affidavits the Central government had also submitted a counter affidavit which mentioned that Sikkimese Nepali community migrated from Nepal. On the same, he explained that the proper study of Sikkim history shows that different sub-communities of Nepali community of Sikkim origin have been living in Sikkim since long time back in ancient Sikkim.

He also objected the statement of Sikkim Democratic Front party of already removed immigrants tag from Sikkimese Nepali. He urged the ruling party not to mislead the people on such issue.