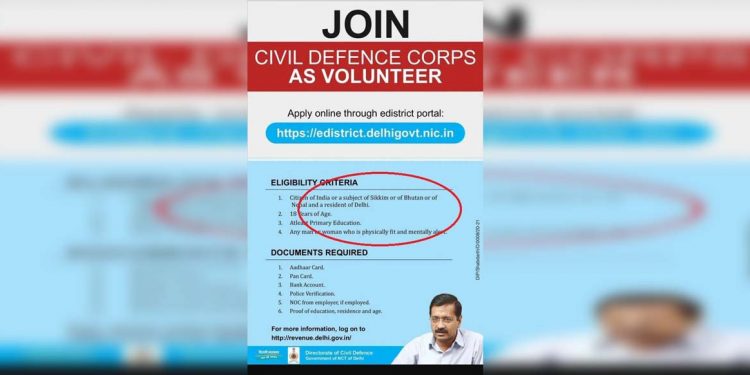 Arvind Kejriwal-led Delhi government created a fresh controversy on Saturday after it published an advertisement which referred to the Himalayan state of Sikkim as an independent country.

The advertisement was published in newspapers by the Delhi government to recruit civil defence volunteers.

In the advertisement, the eligibility column for the application mentions that the applicant should be a citizen of India or a “subject” of Sikkim, Nepal, Bhutan or a resident of Delhi.

A photo of Delhi chief minister Arvind Kejriwal was also printed on the advertisement.

The controversy comes at a time when tension continues between the Indian Army and the Chinese People’s Liberation Army (PLA) after their recent clash in Ladakh and Sikkim along the Sino-India border.

After the publication of the advertisement, Sikkim on Saturday took strong exception to the Delhi government advertisement clubbing the Indian state with Nepal and Bhutan.

In a letter to the Delhi government, Sikkim chief secretary SC Gupta said the “offensive” ad must be withdrawn immediately since it is “immensely hurtful” to the people.

Meanwhile, the Lt. Governor of Delhi, Anil Baijal through an order suspended the a senior officer of the Directorate of Civil Defence (HQ) for publishing the advertisement which disrespects the territorial integrity of India.

“A senior officer of Directorate of Civil Defence (HQ) has been suspended with immediate effect for publishing an Advertisement which disrespects the territorial integrity of India by making incorrect reference to Sikkim on the same lines as some neighbouring countries,” the Delhi Lt. Governor tweeted.

Chief minister Kejriwal while stating that Sikkim is an integral part of India said the advertisement has been withdrawn.

“Sikkim is an integral part of India. Such errors also cannot be tolerated. Advertisement has been withdrawn and action taken against the officer concerned,” Kejriwal tweeted.

Sikkim is an integral part of India. Such errors also cannot be tolerated. Advertisement has been withdrawn and action taken against the officer concerned. https://t.co/BgTcjJF4MF