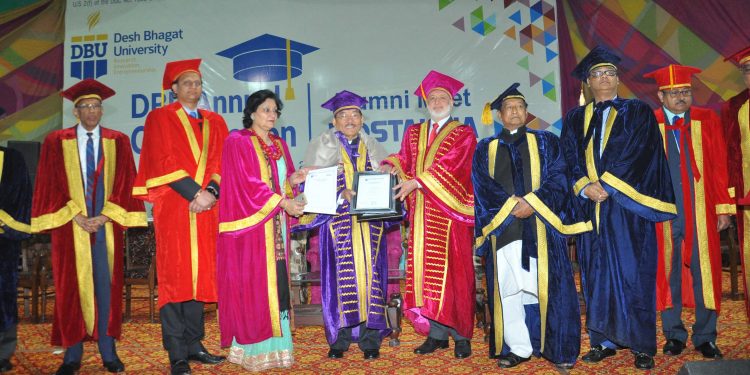 Sikkim chief minister Pawan Chamling was conferred with the honorary Doctorate of Literature [Honoris Causa] by Desh Bhagat University at Gobindgarh in Punjab on Thursday.

The honour was conferred on him for his ‘Exceptional vision, deep commitment and continuous efforts to uplift the weaker section, backward class and women; for his leadership and good governance with moral and spiritual wisdom’.

While delivering his keynote address, Sikkim chief minister Chamling congratulated the bright young students who have just received their degrees and medals and also complimented the Desh Bhagat University, on its tremendous contribution in the field of education which is today one of India’s proud educational institutes.

Chamling mentioned that Sikkim government has made tremendous progress in the education sector duly earmarking 20 percent of state budget under education sector which is the highest expenditure in India so far.

The CM said Sikkim has become the most literate state in the country with the literacy rate of 96.72 per cent, life expectancy of 73.15 years and per capita income of Rs 3, 41, 000 at present.

“Sikkim is the cleanest state, first Open Defecation-free State of India, most peaceful and safest tourist destination state. During the period of 1993 and 2013, forest cover in Sikkim increased to 47.34 per cent from 43.95 per cent in 1993. Sikkim became the only state in India to have increased its forest cover in the past two decades. As a governmental response to growing unemployment, we recently launched a unique program –One Family One Job under which employment to 20,000 were given on January 12, 2019 ensuring 99 percent reach, covering all households in Sikkim,” he informed.

Talking about organic farming, the CM said Sikkim has a unique identity as the first and only organic State in the world and recounted some of the advantages of organic farming as sustainable farming system.

He advised students to update themselves with emerging world knowledge on a daily basis as modern advancement in bio-engineering is about to change the course of evolution itself.

He thanked the University Chancellor, Pro-Chancellor, Vice-Chancellor and faculty members for conferring upon him the honour. He also remembered the people of Sikkim who have entrusted upon him the responsibility to lead the state as their chief minister for the last over 25 years.

The CM was also invited to join the Chancellor and chief guest to felicitate different individuals for their achievement in different fields.