The authorities of Sikkim University (SU) here on Tuesday removed a professor following a girl student lodged a complaint of sexual harassment against him.

By taking the prompt action, University authorities removed Prof Guha from the headship of the department and debarred him from the entering into the department with immediate effect by issuing an office order.

“The HoD of the Mass Communications department has been removed from the post pending an inquiry into the allegation of sexual harassment against him by one of the girl students of his department,” SU registrar TK Kaul said. 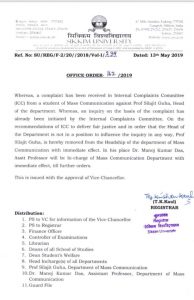 Sources said the girl student lodged complaints of sexual harassment against the head of the department to the university on Sunday.

As per the complaint, the incident took place on May 5 during a marriage party in a hotel in Ranipool.

Sikkim University administration immediately forwarded the complaint to the internal complaints committee [ICC] for an inquiry into the matter.

Registrar Kaul said that immediately after getting the formal complaint from the Mass Communication student on Sunday, the university authorities forwarded the complaint to ICC.

He stated that ICC has come into action immediately and already held its first meeting on Monday and submitted some immediate recommendation.

“On the basis of this immediate recommendation we have removed Prof Guha from the headship of the MC and even removed him from being examiner, evaluator or paper setter,” he said.

He added that Prof Guha has also been debarred from entering the Mass Communication department till the completion of the ICC inquiry.

He added that further action would be taken on the basis of inquiry report.

Registrar Kaul said that as far as the victim is concerned, the university has given her full assurance of security and safety and the security in the department has been increased.

Prof Guha had faced similar allegations while working at Assam University in Silchar in 2013.