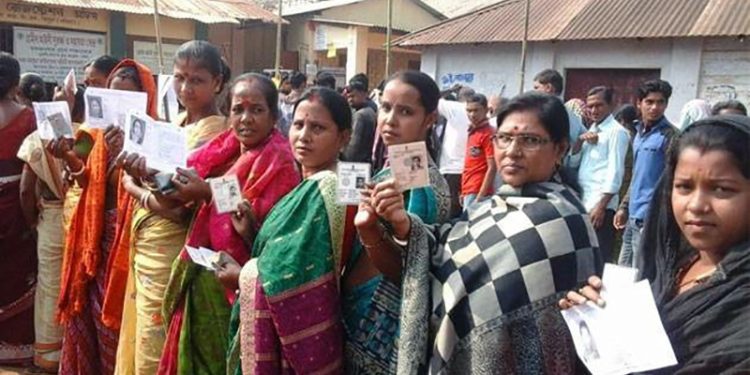 The Election Commission on Sunday clamped Section 144 of the CrPC –prohibiting the assembly of five or more people – in six of the eight districts of Tripura.

This step has been taken to prevent any kind of disturbances till polling ends in the state.

Reports quoted Chief Electoral Officer (CEO) of Tripura as saying that each polling station in the state would have only a table, two chairs, a flag and a festoon on Tuesday.

He also said that help desks of different political parties have to be 200 metres away from the polling stations.

Taranikanti also said that all the polling booths will be heavily guarded and advised everyone against the consequences of violating the prohibitory orders.

He added that police have launched an intensive hunt for outsiders in places like hotels and guesthouses.

The CEO also said that the Election Commission had built up a mechanism to protect its officers and employees from criminals but added that they have to be careful to discharge their duties in a neutral manner.

Tripura has two Lok Sabha constituencies. Polling in the Tripura West seat was held on April 11.

There are 10 contestants, including two women, in the Tripura East seat. But the three main contenders are CPI-M sitting MP Jitendra Choudhury, BJP’s Rebati Tripura and Maharaj Kumari Pragya Deb Barman from the Congress.

Since 1952, the Left parties have won the Tripura East seat 12 times and the Congress four times.

Tripura, which has traditionally witnessed a direct or triangular contest, will for the first time see a multi-cornered battle in the constituency as the BJP has emerged as a potent political force after the 2018 Assembly polls.