The duo has taken up a campaign to promote adventure sports across the country, especially in the north-eastern region.

According to Bhaichung Bhutia, Rijiju is working towards promoting adventure sports like scuba diving, mountaineering and rock climbing in the country especially in the north-eastern states.

Bhaichung is supporting the union minister in this campaign and joined him at the flag-off dive for the Delhi-NCR leg of Op-Blue Freedom, a nation-wide adaptive scuba diving programme for people with disabilities as well as able bodied persons, at SPM Swimming Pool Complex in Talkatora Garden.

The high-end adventure sports survival training and self-defence mission adventure sports is an initiative is taken at a pan India level by a group of armed forces veterans, including the elite special forces of Para regiment and MARCO.

They will be organizing promotional drives in different parts of the country in coming days.

Speaking at the flag-off dive, Rijiju said: “I feel happy to be a part of this closed water Op-Blue Freedom dive today.”

“I myself intend to create awareness about adventure sports amidst the abled and disabled souls of this nation,” Rijiju added.

He further said that such activities spike up human morale and self-esteem overall to make them feel self-sufficient. 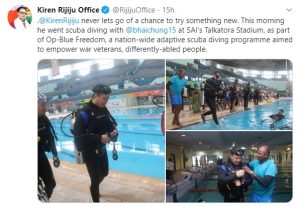 never lets go of a chance to try something new. This morning he went scuba diving with