Regarding Special Rapporteurs’ Questions on NRC

File image of an NRC office.

The Four special rapporteurs of the United Nations Office of the High Commissioner for Human Rights (OHCHCR), who have jointly written to Indian external affairs minister Sushma Swaraj expressing “serious concern” over the alleged discrimination of “members of Bengali Muslim minority in Assam” in NRC seem to have failed to consider all aspects of the issue that impact the lives of the people of Assam too in many ways.  They did not seem to have verified the allegations from independent sources.

The rapporteurs have commented that the NRC exercise discriminates against Indian Muslims and hints that a large number of Indian citizens of the Muslim Minority community will be subjected to exclusion from their citizenship.

In this context, it seems that there is a need for articulation of our views.  The immigration problem faced by Assam’s indigenous people, who have been long subjected to serious demographic pressure by migrants culturally, socially and linguistically different from the ethnic communities of the region, is well documented and I am not reiterating the same here. The problem of large-scale migration to Assam began during the time of British occupation and continued unabated and illegally after India’s Independence resulting in the loss of vast tracts of land, both government as well as lands settled to the indigenous communities, who lost occupancy to squatters coming in hordes in different ways. The indigenous communities have also been deprived of their living space, both economically and politically, due to massive demographic pressure from the illegal migrants with its attended hardship. The natives are on the verge of being minorities in their own land. 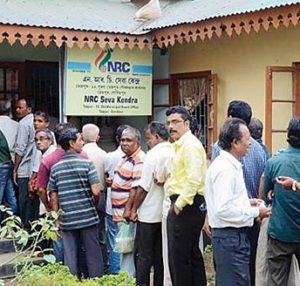 The situation was succinctly discussed by the then Assam Governor Lt General (the Late) S K Sinha in his report submitted to the Government of India during his tenure where he had shown how the population ratio of the migrants steadily increased and altered the demography in their favour. During the Census of 1931 of the British regime, C S Mulan, a British civil servant was the Census superintendent. His observation in his census report to the effect that due to large-scale migration only Sibsagar district would remain with the Assamese-speaking people was almost a prediction.

R G Vaghaiwala’s similar apprehension in 1951 census regarding tremendous demographic pressure of foreign nationals may also be remembered in this context. The decision to record the Indian citizens particularly for the Assam districts in a National Register of Citizens in 1951 was a decision borne out of such genuine apprehension.

Also read: Dokmoka aftermath: Everyone should guard against fake news

The present exercise in Assam is an exercise to update the above NRC of 1951 and not a new documentation and it is done under the supervision of the Supreme Court of India on the basis of its guidelines. All parties arrived at a consensus on the documents to be relied upon and on the procedure to be followed by the authority. The exercise is not to deprive the Indian Muslim minorities but to identify all illegal migrants entering Assam from across the border after the Bangladesh was formed in 1971, irrespective of their religion or language.

The social tension brewing over the demographic changes as mentioned above led to the six-year long massive agitation in Assam from 1980 to 1986 as has been well-documented and needs no reiteration.  The main demand to begin with was to detect and deport all such illegal migrants irrespective of their religious or linguistic status from the day of India’s independence from 1947.   But the change of historical perspective in the neighbouring country and the reality of another partition in 1971, this time not on the basis of religion as was the case of British India but on the basis of incompatible cultural-political differences in India’s neighbour Pakistan, the demand had to be recast in realistic terms and therefore the cut-off date had to be realistic. 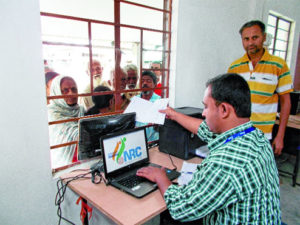 The people of Assam accepted a tripartite accord between the Central Govt. of India, the State Govt. of Assam and the organizations of Assam headed by AASU and AAGSP spearheading the agitation and despite being overwhelmed by the demographic pressure of a infiltrating mass of foreign nationals, the natives accepted that all such migrants coming to Assam prior to March 25, 1971 will be allowed to remain in recognition of the fact that Bangladesh was not born before that date. Thus, those who came from the then East Pakistan were allowed to remain and become citizens in this country despite being foreign illegal migrants. The acceptance of realism was, in a sense, a sacrifice by the indigenous people for the sake of peaceful coexistence.

The updating of the NRC of 1951 is an exercise in pursuance of the Assam Accord as above to identify the foreign nationals illegally entering and remaining in Assam on and after 1971 and not an exercise to deprive Indian nationals belonging to the Muslim minority of their citizenship. As conscious and responsible citizens belonging to the indigenous Assamese community, we would not support any move to deprive any Indian citizen of their rights, rather we will strongly oppose it. The cut-off date has been accepted by all parties and organizations belonging to all communities and even the modalities approved by the Supreme Court to prove citizenship have been agreed upon by all communities.

It is a matter of suspicion that even before publication of the full NRC scheduled to be published by the nodal authority on June 30, some quarters have raised a bogey of exclusion of names of Muslim citizens much before the publication of the above document. How do they come to such conclusion without inspecting the published document in this respect? It seems that there is a motivated propaganda with a view to creating obstacles to the publication of the NRC. Some vested interests might even be trying to generate communal passion at this sensitive time. The updating process has provisions to submit objections if any genuine Indian national’s name gets excluded and even after that further remedy in Indian courts are there.

The rapporteurs having written to the Central Government on the basis of ‘alleged’ complaints/information have failed to objectively examine the situation. If they had, they should have paid a visit to Assam, met all stakeholders and should have reported about the human rights concerns of the indigenous communities too in a balanced manner while submitting their report containing those allegations, which in the present form is unsubstantiated, and is arguably based on erroneous premises. The rapporteurs have also failed to take note of the fact that the exercise is carried on under the direct supervision of the Supreme Court of India, which is independent of the Executive and is well known for its various judgments upholding human rights.

This comment is presumptuous as it is not an exercise in contravention of the section 3 (1) (a) of the Citizenship Act. It is only against illegal foreign migrants entering Assam on or after March 25, 1971, which, of course, includes the stream of people who entered into India during the period covered by the above section of law. It will not affect those ‘born in India’ up to July 1, 1987. The Law is clear, and judicial remedies are available if there is any mistake.

The rapporteurs also mentioned Pratik Hajela’s instruction on the basis of a High Court order to the NRC staff as below,

“Once relevant NRC authorities have been informed about the referral of a case, the concerned family member will automatically be excluded from the NRC. Their status will be recorded as ‘pending’ until their citizenship has been determined by a Foreigners’ Tribunal”.

To me it seems that Mr Hajela’s instruction is based on an erroneous assumption on the basis of a high court order that if one member is found to be an illegal migrant by the court, all others of the same family are open to enquiry as to their nationality and so Mr Hajela has presumed that their entry into the NRC will be kept pending even if they produce valid papers till the Tribunal decides on it. In this case, the Guwahati High Court’s order was meant for only Assam’s border police and did not refer to the NRC. The order did not ask the NRC authority to refer the names of all immediate members of an illegal migrant declared so by the court to the Tribunal for opening an enquiry. As per the High Court’s order, whatever action is to be taken is to be taken by the police and then by the Tribunal through prescribed legal procedure.  The NRC authority has only to follow Supreme Court’s order regarding documents to be accepted by it for entering any name in the NRC. In my opinion, even if a person is declared a foreigner by the court and the other members are subjected to an enquiry by police and then to be decided by a Tribunal for determination of their citizenship, this exercise is not bound on the NRC authority so as to initiate its own action suo moto. Mr Hajela has, of course, chosen to be over-cautious.

“The proposed amendment suggests a broader context of vulnerability of Bengali Muslims to unlawful exclusion from Indian citizenship. While we do not wish to prejudge the accuracy of these allegations, we would like to express serious concern that members of the Bengali Muslim minority in Assam have experienced discrimination in access to and enjoyment of citizenship status on the basis of their ethnic and religious minority status. We are particularly concerned that this discrimination is predicted to escalate as a result of the NRC.”

The indigenous people of Assam themselves have strongly opposed the proposed amendment to the Citizenship Bill that wants to grant citizenship to members of minority communities of three neighbouring countries liberally in violation of the secular principle as enshrined in the Indian Constitution, and hundreds of submissions were made against the proposed Bill during the hearing of the Joint Parliamentary Committee at Guwahati recently. No further comment is necessary in this regard.