‘The affected buffaloes showed signs of difficulty in breathing, frothy mouth, high temperature, a loss of appetite before collapsing and dying within two days’ 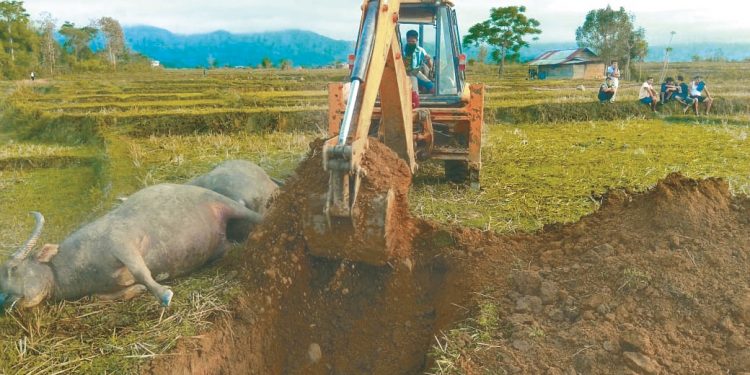 An excavator being engaged to dig pits to bury dead buffaloes in a Nagaland village. Image Credit - Northeast Now

The official report of a quick response team (QRT) of state veterinary and animal husbandry department, which visited the affected villages, put the number of dead buffaloes at over 20.

He then led a quick response team to the affected villages of Sheiri Angami and Sochünoma on April 8 last.

The report said the chairman of the village councils and villagers informed that three to five buffaloes are dying daily. Till April 8 last, more than 20 buffaloes had died, it said.

Notwithstanding the number of dead buffaloes, the inspection report after observation of both dead and sick buffaloes confirmed a bacterial infection.

“We highly suspect HS (haemorrhagic septicemia) disease which are causing death of the buffaloes,” the report said.

Two sick buffaloes were accordingly provided treatment and the veterinary field assistants were given instructions to further continue and complete the treatment.

The villagers have also been provided with antibiotics, vitamins, mineral mixture, anthelmintic, etc., the report said.

Dimapur deputy commissioner Kevekha Kevin Zehol issued a directive to the Dimapur chief veterinary officer asking the department to verify and take stock of the situation so that the epidemic is contained.

While the precise number of deaths could not be ascertained, Socünoma Village Council chairman Salew Seyie said at least 63 buffaloes in his village died over the course of three weeks.

The affected buffaloes showed signs of difficulty in breathing, frothy mouth, high temperature a loss of appetite before collapsing and dying within two days, he said.

Unable to dig the pits manually for each animal weighing over 200 kilograms, excavators were engaged to do the job.