A release issued by AICC general secretary, Ashok Gehlot, C Ngunliangchunga will be the deputy of the CLP constituted by the Congress president while Nihar Kanti Chakma will be the treasurer.

K T Rokhow has been appointed as the secretary to the CLP while Lalrindika Ralte will be the whip. 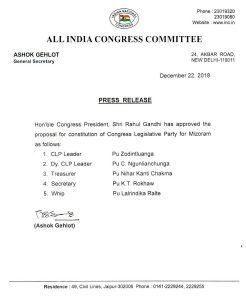 Earlier on Monday last, the five-member CLP in Mizoram elected Zodintluanga, a former minister and treasurer of the recently dissolved CLP as its leader.

Zodintluanga has been CLP treasurer for three consecutive terms during the last 15 years and is the senior most Congress legislator who made it to the State Legislative Assembly in the election to the 40-member State Assembly on November 28 last.

The CLP election was conducted in the presence of AICC Observer Ampareen Lyngdoh.