Three journalists were attacked in Assam within 48 hours last week 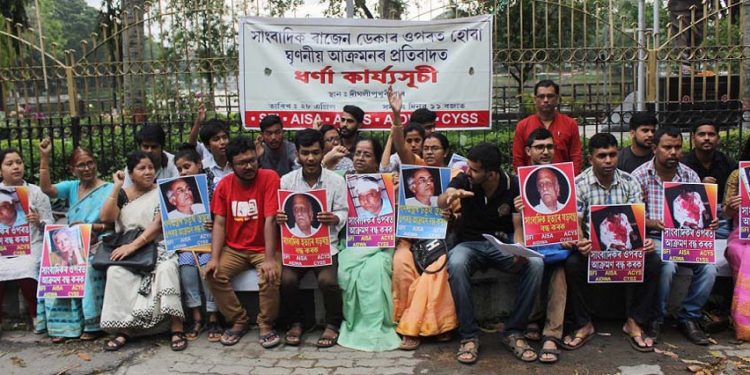 Members of SFI and other students' organigations stage protest at Guwahati recently against journalist attack by miscreants in the different parts of Assam. Image - UB photos

Reporters Without Borders (RSF) has urged the Indian authorities to provide better protection to journalists after three attacks on reporters in the northeastern state of Assam within 48 hours last week.

In one such attack linked to the victim’s coverage of India’s ongoing general elections, there has been alleged involvement of ruling party activists.

Rajen Deka, a reporter of a vernacular daily in Assam, was returning to his home in Nalbari district on the evening of April 25 when he was ambushed and attacked with sharp weapons allegedly by individuals linked to Bharatiya Janata Party (BJP), with the result that he had to be hospitalized with injuries to the head, chest and arm, said a press release issued by the RSF.

The RSF has mentioned a report published by a website which quoted the editor of Deka as saying that Deka had been the target of a social network campaign earlier that day in which participants “spoke of teaching him a lesson.” It was prompted by a short article by Deka that morning about clashes near a polling station the previous day between BJP supporters and supporters of Indian National Congress, the leading opposition party.

Deka reported that he was attacked by six or seven people with “some or the other connection to the BJP” and that he was able to identify at least two of his assailants. But the police claimed that there was only one assailant, and that they had not been able to establish any link with BJP members. No arrest has been made in the five days since the attack.

Also read: Another journalist injured in miscreants’ attack in Jorhat

“We call on Assam’s highest authorities, starting with Chief Minister Sarbanada Sonowal, a leading BJP member, to do everything possible to ensure that an independent investigation identifies those responsible for this attack,” said Daniel Bastard, the head of RSF’s Asia-Pacific desk.

“Any connivance by the security forces with those who want to prevent reporters from covering the elections would be intolerable. Urgent measures must also be taken to guarantee the safety of journalists, especially during the elections, when the role of the media is absolutely essential,” said Bastard.

On the same evening when Deka was attacked, Upasana Barua Goswami, a reporter for a TV channel, was the target of violence by four individuals in a restaurant at Tinsukia district in Upper Assam. Her assailants were arrested but the motive for the attack has not been established yet.

Rajiv Borah, another journalist who runs E-media and works for a Guwahati-based TV channel was also attacked and beaten by five individuals two days later in Jorhat. Only one of his assailants was arrested and, in this case as well, the police failed to identify the motive of the attack, stated RSF.

“Assam’s journalists have been subjected to growing harassment for months, especially those covering the controversial Citizenship (Amendment) Bill, which would make it harder for Muslims to acquire citizenship. Two weeks ago, the home affairs ministry ordered Assam’s government to ‘take necessary action against’ a newspaper, a news site and three regional TV channels that had dared to cover protests against the proposed legislation,” the RSF stated.