Four journalists, including a woman of the state have come under attack in separate incidents in Nalbari, Dhubri,Tinsukia and Jorhat districts recently 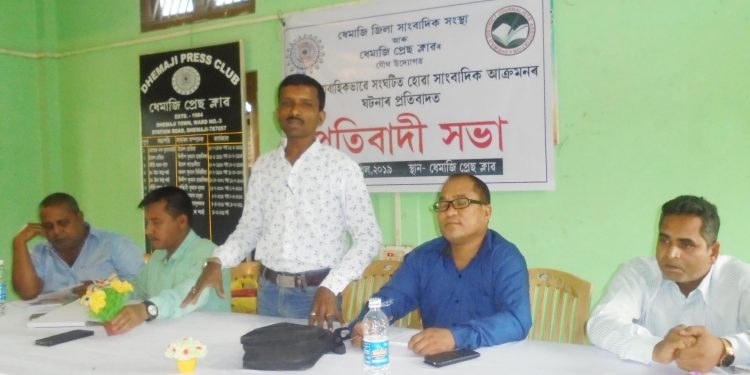 The working journalists of Dhemaji district under the banner of District Journalists’ Association on Tuesday organized a protest meet.

Four journalists, including a woman of the state have come under attack in separate incidents in Nalbari, Dhubri,Tinsukia and Jorhat districts recently.

Journalists Rajen Deka (Nalbari), Rajib Sarma (Dhubri) Rajiv Bora (Jorhat) were injured in the violent attack by the miscreants, while Upasana Barua Goswami of Tinsukia was manhandled by a group of miscreants.

The DDJA members have sharply condemned the act of violent attack and urged the state level journalist organization to take up the issue with the State and central government.

Terming the act as “inhuman” and “anti-democratic”, the DDJA members called on the working mediapersons to take a united stand to fight against the anti-democratic element.

Senior journalists- Dilip Hazarika, Ashini Duwara, Premananda Talukdar and others–who spoke on the occasion, urged the state government to formulate an act for protection of the working journalists.

The meeting finally adopted resolutions to move the State government to ensure safety, compensation to the victims besides time-bound maintenance of the injured media persons with their family members.