The ‘path yatra’ commemorating the 60th year of the 14th Dalai Lama’s journey from Tibet to India way back in March 1959 began on Saturday at Chuthangmo, the Indian check-post on the eastern border of India in Arunachal Pradesh.

The apex body of groups supporting the cause of Tibet in India, the Core Group for Tibetan Cause is organizing the ‘path yatra’ from Chuthangmo, the Indian check-post on the eastern border of India in Arunachal Pradesh to Tezpur in central Assam to commemorate the 60th year of the 14th Dalai Lama’s journey from Tibet to India way back in March 1959.

The ambitious ‘path yatra’ is being organized with the co-operation from the people of Tawang and West Kameng along with the monasteries and NGOs.

The ‘path yatra’ that began on Saturday from Chuthangmo under Zemithang circle of Tawang district will conclude on March 27 at Tezpur of Sonitpur district in Assam. 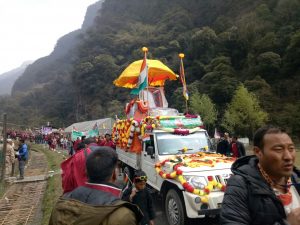 The concluding function of the ‘path yatra’ will be organized jointly by the people of Arunachal and Assam.

The march covering Gorsum Chorten, Lumla, Tawang, Jang, Senge, Dirang, Bomdila, Rupa, Tenga, Chaku, Khelong and Doimara has been organized to pray for the long life of the Dalai Lama so that his ‘message of peace and prosperity continue spreading across the world’.

Notably, the Dalai Lama after escaping from Tibet entered the Indian side at Chuthangmo on March 26 in 1959 and was escorted to Tezpur by an Assam Rifles team of five guards led by Naren Chandra Das.

Das had an emotional reunion with the spiritual leader during the Namami Brahmaputra festival held last year in Guwahati.