Never in the history of independent India or anytime in the past, except on one occasion, did the people the State confronted such a grotesque scenario 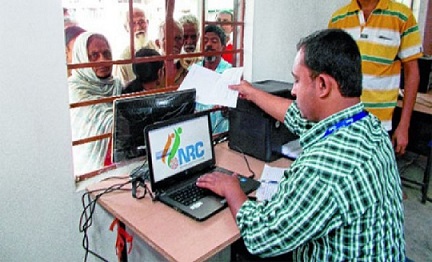 Although over the last two years or so, Assam has been witness to on-and-off upheavals on the law and order front, mounting tensions, confusion in the body politic of the State and misery suffered by the people, be it due to sky rocketing of prices or crude dramas enacted in the political arena that effect the normal life of the general people and the like, a much harsher and gloomier time seemingly awaits the people of Assam from now onwards.

Never in the history of independent India or anytime in the past, except on one occasion, did the people the State confronted such a grotesque scenario. And that one occasion was when the identity of the indigenous people was virtually wiped out during the invasion of Assam by the Maan (Burmese) army. And, mind you, such situations do not spring up overnight. A considerable period ensued from the time traitor Badan Barphukan contacted a Maan general at Calcutta (now Kolkata) till the Maan army poured in on the soil of Assam with its murderous agenda.

In the contemporary scenario, it is for decades together that the people of Assam have been demanding the expulsion of lakhs of foreigners (read as Bangladeshis) from the State while several political parties and fundamentalist organisations took to adding colour to the issue to extract political or communal mileage.

Finally, the Supreme Court came to the rescue of the people of Assam by ordering the State government to prepare an updated version of the National Register of Citizens (NRC) of 1951 and following the publication of the final draft NRC, the people, by and large, heaved a sigh of relief hoping that the final NRC was round the corner and that the foreigners’ problem would be resolved for all times with midnight of March 24, 1971 as the cut-or off date.

Unfortunately, as of now, a coffin has seemingly been prepared by the powers that be for the cremation of the NRC while the hammering of the last nail into the coffin is apparently awaited. The Citizenship (Amendment) Bill, 2016, an obnoxious brainchild of the saffron brigade, has been pushed to the centre-stage by the BJP dispensation at the Centre with a view to providing citizenship to non-Muslim foreigners (primarily Bangladeshis in the case of Assam and the NE) seemingly with the sole purpose of multiplying the vote-bank of the BJP. One can very well conjecture that once the Bill becomes an Act and the existing Hindu Bangladeshi nationals  and hoards more likely come become Indian citizens, a permanent Hindu vote-bank may  come to stay to vote overwhelmingly for the saffron party in all electoral battles henceforth.

While the last few months witnessed massive protest against the Bill across the length and breadth of Assam, displaying contemptuous disregard to all public opinion, The BJP-led government got the Bill passed in the Lok Sabha and presently awaits the nod of the Rajya Sabha.

Meanwhile, as a way of countering all protest against the Bill, the ruling dispensation is apparently adopting a divide and rule strategy. While six communities of the State have been demanding ST status since long, it is only now, with the tenure of the Central government at its fag end, that a Bill to grant ST status to the said communities was tabled in the Rajya Sabha. The move of the government obviously appears to be to wean away the six communities from the mainstream Assamese people who are opposing the CAB-16 tooth and nail. On this count, the government appears to be adopting a 2-pronged strategy.

Firstly, to divide the greater Assamese society and secondly to bring the six communities under its fold as the Lok Sabha polls are round the corner. Further, while luring the six communities with prospective ST status, the government also succeeded in bringing a rift in the existing ST communities with one group taking to protest against the government move to grant ST status to 6 communities. Again, by way of sop to the Assamese community in its obvious attempt to weaken the protest movement and as a poll stunt in view of the 2019 general elections, the Centre has now taken up, at least on paper, the issue of constitutional safeguards to the indigenous people.

Any political observer would definitely question as to why so many issues are being taken up only now by the Centre although the BJP took over the reigns of the government at the Centre more than four-and-a-half years ago.

Presently, the hard hammering of the greater Assamese society by the Centre has already begun. To that end the Government appears to have succeeded in its apparent attempt to divide the people on the basis of language, religion, ethnicity, community and the like. Whereas the government came to power both at the Centre and the State on the promise of all round development (Saab ka saath, saab ka vikash), any development worth its salt has seemingly suffered the blackest of eclipse over the last few years. The government is also aware that its much vaunted development and ‘Aacche Din’ would not cut any ice not only in Assam but across the country now.

Meanwhile, with Magh Bihu already behind us, and going by the warnings issued by various protesting organizations, the State is likely to witness the resurgence of protest against the Bill by leaps and bounds. At this juncture it may be pertinent to state that media reports had hit the headline (prior to tabling of the Bill in the Lok Sabha) that the security agencies had warned the government that the situation in the State might ‘worsen’ if the Bill is passed. Now that the Bill has been passed in the Lok Sabha, the same media has reported that the “Centre ignored warnings from security agencies”.

It now appears that in its commitment to promote its hardcore Hinduvta agenda to the extreme and in the process make room for settlement of non-Muslim foreigners (Hindu Bangladeshi nationals) in Assam, the Centre is apparently least bothered about the sons of the soil – their wellbeing, culture, language, religious harmony or the fragile demography. The way protest against the Bill is burgeoning by leaps and bounds with every passing day, it is almost clear as daylight that the sons and the daughters of the soil of Assam are fully prepared for a decisive Saraighat as the 2019 election approaches. So far, through the medium of democratic protests, the indigenous people of Assam have sent the message loud and clear that the Sultans of Delhi and Dispur must accept the down-to-earth truth that “Jati, Mati & Bheti” of Assam belong to the indigenous people of the State and that they are not prepared to part with the same, be it private land or Government land.

It indeed is shuddering to note that that the Centre has caused the warnings issued by the security agencies to fall by the wayside. Going by media reports, the powers that be have also been warned that the Bill could give the much needed fuel to the militant outfits of the region. From that point of view, it may not be surprising if in the coming day a fresh spurt in militant activities rock the region. The question arises if the Centre is desirous of such violent activities so that the present movement against the Bill could be crushed at gun point while thousands are put behind bars. The Government certainly displayed its fascist face in Tripura by indulging in wanton firing on peaceful tribal protesters against the Bill recently. The fascist design also made its appearance in Assam with Dispur manufacturing serious criminal charges against three frontline activist against the Bill. Fortunately, the Gauhati High Court granted interim bail/bail to all the three before the police put them behind bars.

While the coming days may witness unrest, turmoil and turbulence rocking the State, analysing the government approach one may question if the powers that be are deliberately and calculatedly pushing the affairs of the State to that end with a view to letting loose its fascist design to the fullest potential against all protests.