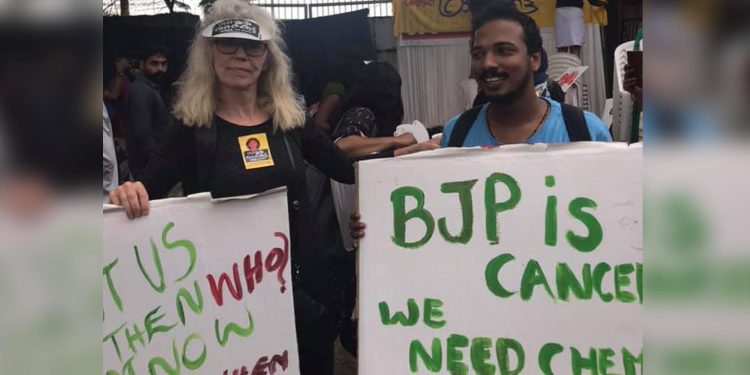 Janne-Mette Johansson who participated in an anti-CAA protest march on December 23 in Kochi. Image credit - facebook

A Norwegian national, who is at Kochi in coastal Kerala, has been in trouble after participating in an anti-Citizenship Amendment Act (CAA) protest march.

Janne-Mette Johansson participated in an anti-CAA protest march on December 23.

While sharing a few images of anti-CAA protests and march, 74-year-old Johansson on her facebook page posted on December 23: “This afternoon I participated in a protest march; People’s Long March. It started out from Gandhi Circle Ernakulam, and we marched with slogans and flags to Vasco da Gama Square Cochin, while the protesters were singing and chanting and with their fists up.”

“The People’s Long March was very well organized. During these 12 kms there were two places we got water with salt and sugar, we also had orange juice.

“No riots, just people determined..lifting up their voices, saying what has to be said. The police helpful during this protest march,” she added.

A media report quoted an official as saying that the Foreigners Regional Registration Office (FRRO), under the Union Home Ministry, is investigating the matter after it came to know through the social media that the Norwegian woman participated in protest against CAA on Monday.

The intelligence agencies under the BJP-led central government have become alert against foreign nationals who have extended support towards the anti-CAA movement.

The action against the Norwegian citizens comes close on the heels of a German student, who joined the anti-CAA protests in Chennai, being directed to leave the country since his participation in demonstrations over domestic issues allegedly violated visa regulations.

Regarding the reports of Janne-Mette Johansson being summoned to the FRRO office for questioning, a media report quoted Foreigners Regional Registration Officer (FRRO) Anoop Krishnan as saying: “We are investigating whether the foreigner has violated Visa norms or not.”

The official said: “We can’t say a concrete action is taken into it. An inquiry is on.”

He said the agency came to know about the participation of the foreign national in the protest from the social media platform.

The Norwegian woman is visiting Kochi on a tourist visa.