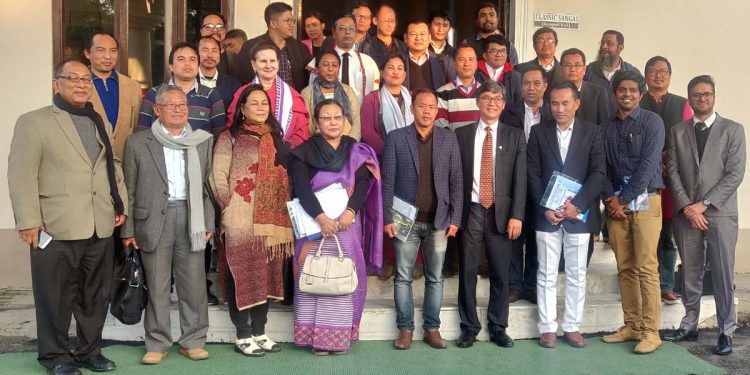 Representatives of civil society organisations (CSOs) across Northeast who attended North-East SDG Consultation on ‘Leave No one Behind’. Image credit – Northeast Now

Several civil society organisations (CSOs) across the Northeast came together to discuss the unique challenges and solutions required to achieve the United Nations’ Sustainable Development Goals (SDGs) that India is signatory to.

The North-East SDG Consultation on “Leave No one Behind” was held recently at Manipur’s state capital Imphal.

India’s UN resident coordinator Renata Lok-Dessallien, who took part in the discussions, said SDGs “are the blueprint to achieve a better and more sustainable future for all”.

“Sustainable Development Goals address the global challenges we face including those related to poverty, inequality, climate change, environment degradation, peace and justice. These are the 17 goals which are inter-connected and in order to leave no one behind, it is important that we achieve them all by 2030,” she said.

Speaking about the challenges in achieving the SDGs in the region, economist E Vijoykumar from the economics department at Manipur University informed that the Centre has committed itself in every forum to the realization of the SDGs.

He said the northeastern region is going to get a permanent place in the development policy discourse under the overarching exhortation ‘Sabka Sath Sabka Vikas’.

“No one is going to be left behind,” he said, adding that with the inspiration from NITI Aayog, several states including Manipur have brought out a state Vision 2030 documents which seek to synthesise the aspirations of the people with the SDGs.

Earlier, welcoming the civil society delegates, the executive director of Human Rights Alert, Babloo Laitongbam, said India is presenting its second VNR on SDGs in the UN High-Level Political Forum 2020 in which NITI Aayog is coordinating its preparation.

“With the support from the UN Resident Commissioner’s office (UN RC), the NITI Aayog has proposed to integrate civil society organisations’ perspective, data, and inputs in the “Leave No One Behind” section of the VNR report.

For this purpose, Vada Na Todo Abhiyan is anchoring a series of consultations throughout the country with CSOs working with various groups including children, adolescents, youth, women, elderly, dalits, Adivasis, bonded labourers and victims of human trafficking, he said.

Consultations have also been made with LGBTQIA+ groups, farmers, migrants, urban and poor people with disabilities, people living with HIV, religious minorities and refugees in the Northeast.

Speaking about education, one of the components of the SDGs, Arunachal Citizens’ Right (ACR) executive director Bamang Tago disclosed that Arunachal Pradesh does not have any transfer & posting policy/guidelines for teachers.

“We can’t expect quality of education in the absence of such transfer & posting policy/guidelines,” said Tago.

It should be noted that the state Cabinet has recently approved the Arunachal Pradesh Teachers’ Transfer & Posting Policy, 2020 to ensure need-based distribution of teachers.

Tago also pointed out that most of the person(s) posted as District Project Coordinator (DPC) in the various districts are not the person(s) who have committed to implement the state/central funded schemes to bring quality of education but they have vested interests.

Tago also moderated the plenary session of eight thematic groups that discussed and identified the obstacles and challenges in achieving SDGs.

During the discussion on food safety issues, Arunachal Pradesh Union of Working Journalists’ general secretary, Ranju Dodum, pointed out on the absence of policies across the state’s which give incentives to farmers for growing agricultural products.

“Almost all state governments are willing to give subsidies to farmers to grow cash crops but hardly any benefits are offered for those growing food crops,” he said, adding, “When there is a food crisis, we will need rice not rubber.”