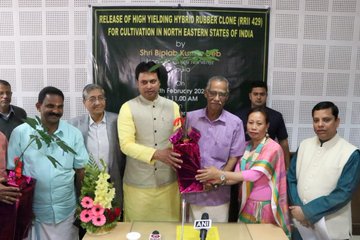 The Rubber Board, on Wednesday, released a new cold and disease tolerant hybrid rubber clone – RRII 429 – to improve the commercial cultivation of natural rubber in the Northeast.

This it did after 23-years of multi-locational field trials in the north-eastern states and West Bengal,

A top official of Rubber Board said based on 23-years of multi-locational field trials in Assam, Meghalaya, Tripura and North Bengal in West Bengal, the Board has evolved the new cold and disease tolerant hybrid rubber clone.

It is developed to expand the ongoing natural rubber cultivation in the north-eastern states and increase the production and productivity.

“Considering the ecology, temperature, natural atmosphere of the northeastern region, the new rubber clone would be a most suitable variety of the natural rubber and boost the production and productivity thereby enhance the economic position of the rubber cultivators of the region,” the official said without wanting to be named.

“As the new rubber clone is a fast growing variety and high yielding besides cold tolerant, this would be a step towards increasing the rubber production of Tripura and other nortrheastern states,” he added.

Dhanania said Prime Minister Narendra Modi has asked to support the weaker region of the country and that’s why the Rubber Board scientists had developed this new natural rubber clone for the north-easteren region.

Another Rubber Board official said that the new natural rubber clone during the trials in the cold-prone north-eastern states and North Bengal has shown excellent growth and high productivity.

The new rubber clone would improve the genetic diversity of rubber cultivation in the north-eastern region.

This is highly required as a guarantee against new pests and diseases to which some rubber clones might become susceptible in future due to reasons such as climate change, he said.

The official said the new location-specific high yielding hybrid clone for the cold-prone Northeast would be very beneficial to the tribals and thousands of other rubber growers.

At present, rubber is cultivated on over 1,00,000 hectares in the northeast region, comprising eight states.

The Northeast is a non-traditional area. Apart from Assam and Tripura, which are the major rubber producing states of the region, rubber has been found suitable for cultivation in Arunachal Pradesh and Manipur as well the lower reaches of the hills in Meghalaya, Mizoram and Nagaland.