No genuine Indian Gorkhas will be left out of NRC: Assam chief secretary 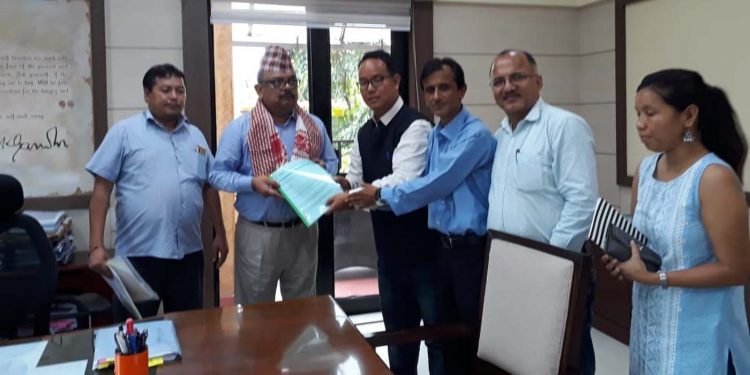 Assam chief secretary Alok Kumar assured the Bharatiya Gorkha Parisangh (BGP) that no genuine Indian Gorkhas would be left out of the National Register of Citizens (NRC).

Chief secretary Kumar also assured the BGP of considering formation of an empowered committee to address the woes of the Gorkhas who were left out of the final NRC.

Informing this, Nanda Kirati Dewan, the national secretary of the BGP, said Kumar made the assurance during a meeting with a delegation of the BGP at Janata Bhawan in Dispur on Saturday.

The BGP delegation, led by Dewan and Lakpa Lama, NE zone secretary of BGP, appraised the chief secretary of the issues of Gorkhas, who were left out of the final National Register of Citizens (NRC).

Now, the left out Gorkhas will have to appear before the Foreigners’ Tribunals (FTs) despite the fact that an order from the Union Home Ministry had exempted the Gorkhas and the Gorkhas marked as D-voters from appearing before FTs.

The final NRC for Assam was published on August 31, 2019 with exclusion of over 19 lakh names.

Informing about the meeting, Dewan said “the FT Monitoring Cell of Gauhati High Court” in a case No. I. A. (Civil) 4322/2018 on December 20, 2018, directed the Assam government to “file a fresh writ petition in Gauhati High Court seeking permission to withdraw cases against Gorkhas in FT following MHA clarification on Gorkha D-Voters”.

These issues were thoroughly discussed with the chief secretary, who, as suggested by the BGB, “considered” to form empowered committee at the District and Sub-Divisional/Circles to “dispose of” such cases, said Dewan.

He also said the civil society organisation should play a vital role as it is a judiciary monitored process.

The BGB stated: “The Gauhati High Court directed the government of Assam represented by the commissioner & secretary (Home, Political Affairs, Passports & Borders) to file a fresh writ petition before appropriate bench in order to legally implement the MHA Notification BB/PK/SS”, issued on October 10, 2018 by the PIB.

However, even after several months, the Assam government is yet to file a fresh case in the Gauhati High Court.

“This has jeopardized the cases of thousands of Gorkhas who seek redressal in getting their names removed from the list of D-Voters and from the FT,” Dewan said.

Lakpa Lama, the NE zone secretary of BGP, said, “We urged the chief secretary to take appropriate measures so that a fresh case is filed at the earliest in the Gauhati High Court and Gorkhas are delivered justice.”

The delegation also urged the chief secretary to implement the instructions from the Ministry of Home Affairs (Foreigners Division), to the chief secretary of Assam in a letter No. 25022/74/2010 on September 24, 2018 regarding the Gorkhas’ cases in reference to trials at Foreigners’ Tribunals.

The BGP delegation also requested the chief secretary to send written communications to the deputy commissioners of all districts, the Director General of Police of Assam and all appropriate authorities of the government to validate the MHA communication.