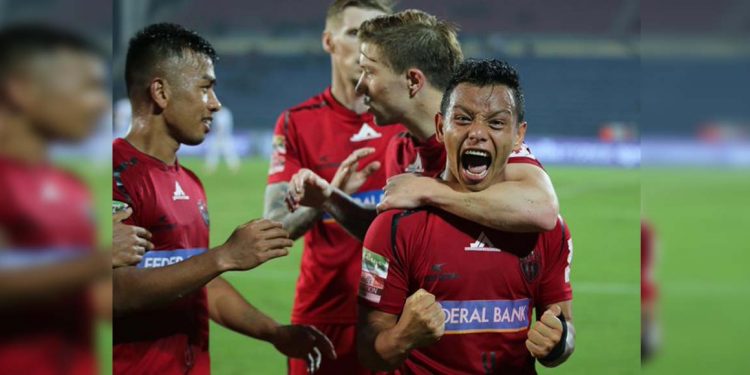 A breathless game of football between NorthEast United FC (NEUFC) and Jamshedpur FC came to an end with a thrilling 3-3 draw at Sarusajai stadium in Guwahati.

The last 13 minutes of the Indian Super League (ISL) match in the Indira Gandhi Athletic Stadium at Sarusajai gave a thrilling experience to the audience yielding four goals.

But no team could make the last laugh as the game ended with a 3-3 draw.

It was the last game for Robert Jarni as the head coach of NEUFC as the club parted ways with Jarni and his staff members.

After the game, Jarni had an interaction with the media where he said: “Our team played really good and I am pleased with the performance. We must be happy with one point, but with the chances we had we must have won.”

The highlanders under Jarni could not earn any goal for five games.

However, with good performance of late, the team was able to earn three goals in one game but that too could not save Jarni’s job and NEUFC has shown him the door.

A media report quoted Jarni as saying: “On one hand I am a bit sad, but I must say that we were lucky too. It’s great that our players showed that they can play really good and that bodes well for this squad’s future.”

Jarni, however, accepted that he could not “really do anything different for the game”.

“We know that the season is over for us, I just asked the players to play for our pride,” he added.

Speaking about the No. 1’s contribution to Monday’s game, Robert Jarni said, “Subhasish has been great throughout the season. I think for the saves made he will figure somewhere at the top of the league.”

“I am very pleased with him and it was a superb performance,” he added.

A lot of positive vibes after one cracker of a game at the Sarusajai! ??

We thank the Highlanders in the stands for their fantastic support. ?? #StrongerAsOne pic.twitter.com/DsbOjgV3h9