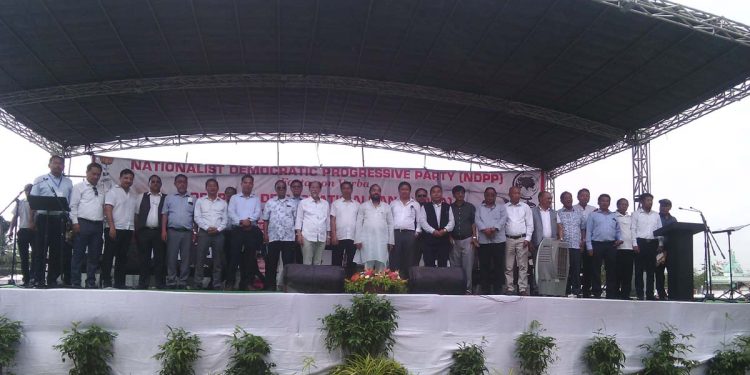 File photo of NDPP leaders with others.

The ruling NDPP termed the decision of the Opposition NPF to withdraw from the Joint Legislators Forum (JLF) on Naga Political Issue as a shocking political development for the entire Naga society.

The decision of the Naga People’s Front (NPF) was “indeed unfortunate”, the media and communication committee of the Nationalist Democratic Progressive Party (NDPP) said in a statement.

“It is even more surprising considering the fact that the Government of India led by the Prime Minister and Home Minister have taken proactive steps to resume the Indo-Naga political dialogue in right earnest,” the ruling party said.

According to it, the resumption of the peace talks has been welcomed by all sections and there is a fervent call for unity, understanding and oneness.

The NDPP endorsed the August 20 resolution of the People’s Democratic Alliance (PDA) wherein it appealed to the NPF to reconsider its decision to withdraw from the JLF.

“This is a time for our society to be coming together to strengthen not just the negotiating parties but to empower ourselves with unity,” it said.

Saying that this is not the time to point fingers at others, find fault or make excuses to stay away, NDPP said the leaders of all sections of the Nagas must set aside differences and rise above respective affiliations in the greater interest of our people.

The need of the hour is for everyone to rise to the occasion and work as one Naga people, it said.

The NDPP said it is of the firm opinion that the party will not engage in one-upmanship and reply to the allegations made against chief minister Neiphiu Rio and the PDA on the JLF matter.

The party reiterated the appeal to NPF to reconsider the decision to withdraw from the JLF.

“Let us all work together in the spirit of one Naga family and let us leave no stone unturned in our collective endeavour to bring lasting peace and progress.

“The present and future generations will judge us for our decisions, our sacrifices and our contributions,” it said.

“Let us all work towards facilitation of a congenial environment for preparation of a positive landing ground that is conducive for the much expected political solution,” the party further said.