More than 17,000 people have returned to Nagaland from outside till date after imposition of lockdown 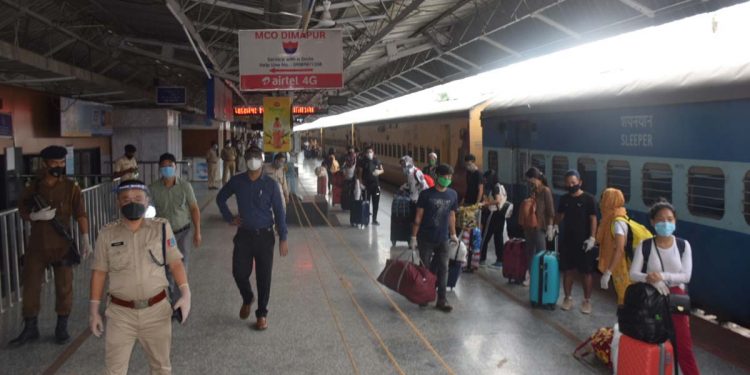 The last batch of returnees to have come by special train from outside the state arrived at Dimapur on Thursday morning.

The special train carrying 290 Naga returnees from Bangalore arrived in Dimapur railway station at around 8.20 am.

Out of them, 137 are from Dimapur and Peren districts, 37 from Mon, 19 from Tuensang, 17 from Longleng, 18 from Kiphire, four from Phek, 24 from Zunheboto, four from Mokukchung, 16 from Wokha and 14 from Kohima districts.

On their arrival, the returnees from Dimapur and Peren districts were taken to Agri Expo site here for undergoing necessary protocols before sending them to the government quarantine centres here.

The returnees from other districts of the state underwent thermal screening at the medical counter at Dimapur railway station.

They, accompanied by their liaison officers, were then transported to their respective districts by Nagaland State Transport buses.

More than 17,000 people returned to the state from outside till date after the lockdown was imposed.

Forty-nine returnees from Senapati district in Manipur also came by the same train.

Team Dimapur provided food packets and water to them, who were then transported by buses arranged by the Manipur government.