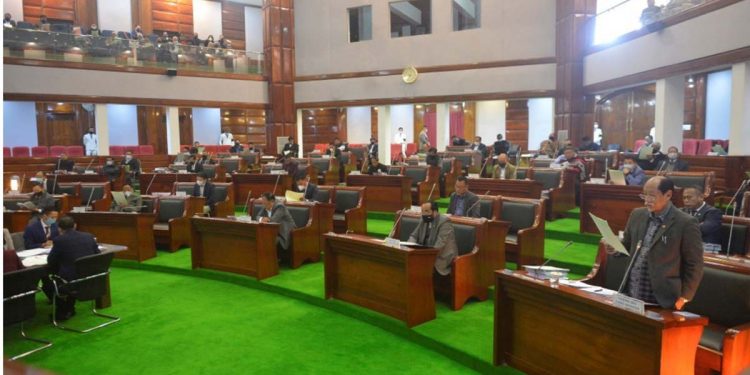 Nagaland chief minister Neiphiu Rio has urged all the Naga political groups to come together under the spirit of reconciliation, mutual trust and understanding.

“It is time to rise above our differences and come together for the greater cause of our land and our children,” Rio said while participating in the special discussion on Naga political issue on the third day of the ongoing State Assembly session.

He also urged all sections of society to continue to strive towards true and genuine unity.

Stating that the Nagaland Legislative Assembly is the highest platform of democracy in the state, he said the House carries the voice and aspirations of entire Naga people.

So, he said, it is important for the House to deliberate on this long-standing Naga political issue and express the desires and feelings of the citizens of the state.

“This House is the voice of the people, and whatever is deliberated on this floor will be recorded in history for all times to come,” he stated.

Rio said a political solution that is honourable and acceptable to the Naga people will usher in a new era of rapid economic growth, all-round progress and greater employment opportunities for our youth.

“We believe that given an encouraging environment, our youth and our children can achieve success and excellence in every field and in the national and international arenas,” he stated.

“At this critical juncture, it is of utmost importance that the Naga society must stand as one, speak as one, and give a final push to collectively achieve a settlement and remove the shackles that burden our society once and for all,” he said.

Rio said a democratic and just settlement of the Naga political issue will not only bring permanent peace and stability to the entire Northeastern region of the country but it will also directly strengthen the democratic foundations of this great nation.

He expressed his desire as leader of the House to sound the aspirations of the people for a political solution that is honourable and inclusive, that upholds the democratic rights of “our people”.

He also appealed to the people of all neighboring states to extend all possible cooperation so that the peace process can conclude in a successful manner, and peace and stability may come in the entire region.

Rio delved into a brief history about the Naga political movement dating back to 1918 when the first political organisation of the Nagas took birth in the form of the “Naga Club”.

He explained in detail the numerous landmark events that took place over the span of a century, events that had defined the course of the long-standing Indo-Naga political issue.