Come together for a new beginning: Ravi to Nagas 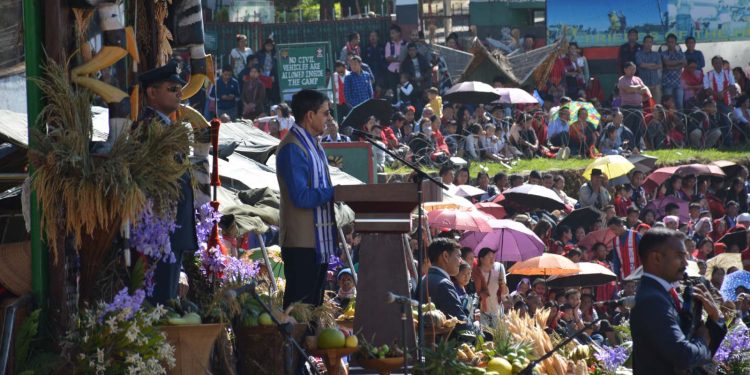 Nagaland governor R.N. Ravi on Thursday urged all the Nagas to come together for a new beginning towards unity, prosperity, development and brotherhood.

Ravi said the Nagas are on the cusp of history as a new dawn has begun for a new era of peace, unity and prosperity.

He said this while addressing the Tokhu Emong Mini Hornbill as the special guest in Wokha local ground.

Ravi referred to the Naga groups who have come to an understanding with the Centre to ink the final agreement to resolve the Naga issue.

Ravi urged all to overcome the bitterness and bad memories of the past.

The governor said the spirit Tokhu Emong “senchumta”, which means reconciliation and coming together, was appropriate and befitting the present situation.

Ravi lauded the Lotha Hoho and the Lotha people for extending immense support to him in his endeavour to bring peace to this land even before he became the governor of the state.

He expressed hope that the Lotha community will continue supporting him in the days to come as well.

As inheritors of a very rich culture and civilisation, the governor said the Naga people must ensure that the rich culture does not fade away in the wave of modernity, modern technology and modern way of life.

Adviser to the chief minister and adviser to science and technology, IT, new and renewable energy Mmhonlumo Kikon attended as the chief host of the festival.

On behalf of the Lotha community, Kikon assured of support and cooperation to governor Ravi in bringing about peace, unity and reconciliation for the Nagas.

The celebration was marked by cultural presentation by Sumi and Assamese cultural troupes.

The mini hornbill was attended by thousands of people in their colourful traditional attire.