Ravi urged to abstain from ‘selective division’ of Nagas 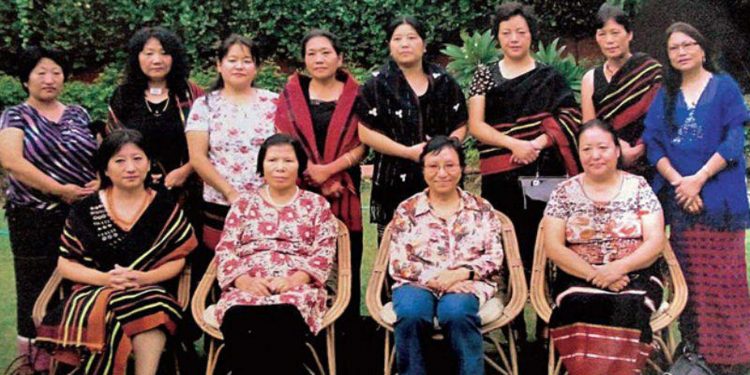 File photo of some members of the Naga Mothers' Assocition. Image credit - www.mastylecare.org

The Naga Mothers’ Association (NMA) has urged Naga peace manager and Nagaland governor R.N. Ravi to abstain from “selective division” of the Nagas.

The association’s appeal comes as the state agencies and Nagaland governor Ravi have allegedly sidelined several groups from the peace process.

Officials from the central government on Thursday are holding closed-door parleys with “selective” Naga representatives including NSCN (IM) leaders in Delhi.

“We place on record our objection at this critical juncture on the policy of exclusion of civil society like the Naga Hoho (NH), the Naga Mothers’ Association (NMA), the Naga Students Federation (NSF) and the Naga Peoples Movement for Human Rights (NPMHR),” claimed NMA.

NMA in an appeal issued on Thursday said these organizations have “supported the peace process and peace dialogue for decades, by the State agencies and the Interlocutor of the Naga peace talks”.

The women’s body said the voices of Naga women can never be ignored in the peace process.

The NMA wants the Nagaland governor to “remember that Naga women’s voices must also be counted in the process of peace building”.

“The Naga Mothers’ Association stands by our commitment towards an ‘inclusive and just peace,’ which respects our Naga aspirations and long years of struggle,” the appeal read. 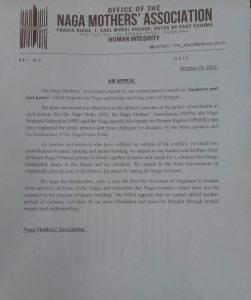 The NMA said the women and mothers, who have suffered as victims of the conflict, have “contributions to peace making and peace building”.

They appealed to different Naga political groups to come together and speak for a solution that can bring peace for the Nagas and their children.

They also urged the state government – which is distancing itself from the issue of separate Naga flag and constitution – to play the role of facilitator for peace.

Nagaland has lost thousands of lives in violence in the last several decades.

The NMA said they “cannot afford another period of violence”.

“Let there be no more bloodshed and peace be brought through mutual respect and understanding,” it added.