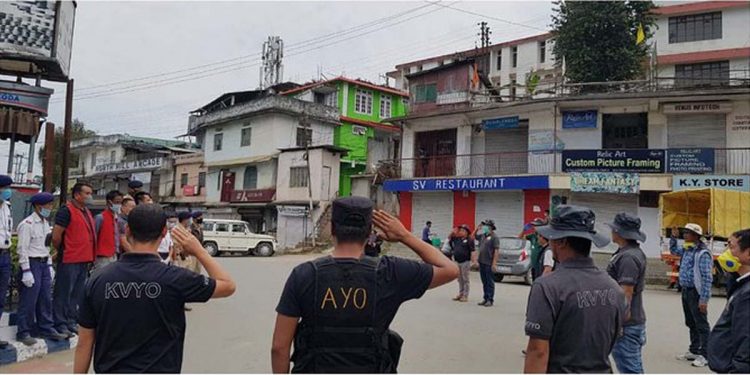 Angami organizations on Tuesday demanded that the statement, issued by the Nagaland home commissioner restricting organizations from assisting the district administrations and police during lockdown, be withdrawn.

“Following the imposition of the first phase of nationwide lockdown from March 24 midnight to April 14, we have observed that the citizens of Kohima town have failed miserably in adhering to the directives laid down by the state government, particularly on social distancing and random vehicular and public movement,” the letter said.

Stating that the state home commissioner has made it clear that the government had not given permission to any organization for implementation of the lockdown order, the letter said, “the Angami frontal organizations have decided to intervene and manage the situation here in Kohima”.

Along with other parts of the country, lockdown has also been extended to May 3, 2020 in view of the COVID-19 pandemic.

The Angami organizations in the letter said: “We are deeply disturbed by the mixed response from the public in complying with the laid down directives, and that has compelled us to intervene without wasting time.”

Saying that “safety of our people is our priority”, the organizations in the letter said, “we are ready to render our invaluable services to protect the citizens of Kohima district from this pandemic, and also from it reaching our land further and further.”

“Now that a positive case had been reported in Dimapur, there is fear-psychosis among the people which we cannot ignore at any cost,” the letter said.

Requesting the home commissioner to withdraw the statement “at the earliest in the larger interest of the public”, the organizations said: “In the failure to do so, we shall hold you responsible for any untoward incident that arises here in Kohima concerning Covid-19”.

Angami Public Organisation (APO) has written to the Principal Secretary & Home Commissioner, Govt of Nagaland, asking him to withdraw his statement dated March 29, 2020, in restricting organisations from assisting district administration and police during the lockdown period. pic.twitter.com/yA5TRS4aPa