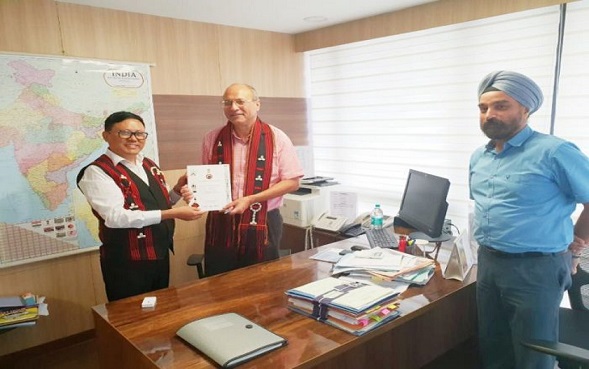 Nagaland Government on Tuesday submitted a memorandum to the 15th Finance Commission highlighting the impact due to the change of funding in the previous years and a proposal for the next five years – 2020-21 to 2024-25.

Notably, a team of 12 members led by its chairman Nand Kishore Singh arrived in Kohima on Tuesday afternoon on a three-day official visit to the State.

Earlier on Monday evening, State finance secretary Kikheto Sema informed media persons that the memorandum for 2020-21 to 2024-25 was earlier submitted on August 16 and the supplementary memorandum was under preparation for submission during the Commission’s Tuesday visit.

The memorandum projected Rs 3,535.50 crore for the five-year period for repair and maintenance; Rs 1,115.59 crore for four hydro projects and Rs 4,392.93 for critical infrastructural development, according to a report in Nagaland Post.

The memorandum further pointed out that the State’s finances suffered due to change in funding pattern by the ninth Finance Commission during 1989-90 in which grant of fund was discontinued, instead of providing liberal assistance to cover Balance from Current Revenue (BCR) gap through Additional Central Plan Assistance (ACPA).

It was also pointed out that due to the change in funding pattern from 1989-90 onwards, the State faced problems even in releasing monthly pay and allowances to government employees even as the government was unable to undertake developmental activities, which affected the overall socio-economic condition of the State.