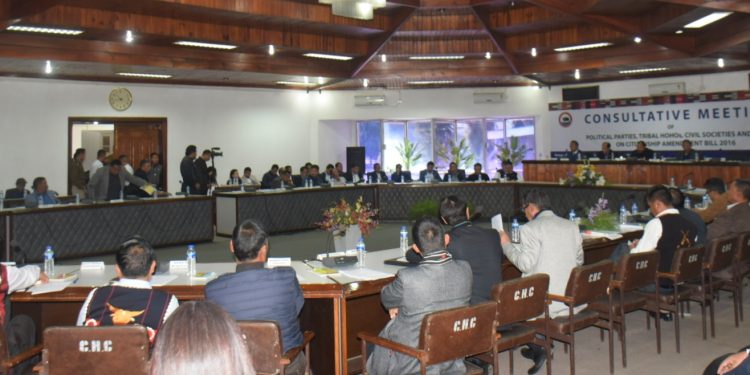 Consultative meeting of Political parties and other organisations in progress in Kohima on Thursday.

A consultative meeting on Citizenship (Amendment) Bill, 2019, convened by the Nagaland government with civil societies, tribal organisations, political parties, NGOs and student organisations here on Thursday unanimously resolved to oppose the bill and reject its implementation outright in Nagaland.

The NPF said it decided to boycott the meeting as the Nationalist Democratic Progressive Party-led People’s Democratic Alliance government did not oppose the bill when it was tabled in Lok Sabha on January 8.

“The PDA government not opposing the Bill in Lok Sabha was a clear indication that they have endorsed it in totality,” the NPF said.

The Congress party said the meeting is a case of “too little too late” after enough damage was done by the PDA government while “pursuing the BJP-driven agenda”.

The meeting expressed its solidarity with the rest of the north eastern states who have expressed serious concerns over the controversial bill.

“Nagaland stands in solidarity with the rest of the region in order to safeguard the rights of the indigenous people of the region,” the meeting, chaired by chief secretary Temjen Toy and attended by 184 representatives Naga tribe bodies, NGOs and student organisations besides members of various political parties of the state, resolved.

It stressed that Nagaland is a “political state” formed out of the 16-Point Agreement and accordingly Article 371 (A) of the Constitution protects and safeguards the rights and privileges of the citizens of the state, as “no act of Parliament shall apply in the state of Nagaland unless the Nagaland Legislative Assembly by a resolution so decides”.

The House was of the view that all Naga organisations should have unanimity in supporting this stand in the greater interest of protecting and safeguarding the rights and privileges of our people as enshrined in the Constitution.

“No non-indigenous person can claim rights and privileges in Nagaland as we stand protected under the provisions of Article 371 (A) of the Constitution of India and the Inner Line Permit mechanism as per the Bengal Eastern Frontier Regulation, 1873 which has been reaffirmed as Clause 16 of the 16-Point Agreement,” the signatories of the resolutions said.

One of the resolutions said Article 371 (A) ensures that citizens of India who are not indigenous inhabitants of Nagaland cannot acquire property or settle down in Nagaland.

Therefore, any person who acquires Indian citizenship through the amended Citizenship Bill will be as ineligible for acquiring property or settling down in Nagaland as any other non-Nagas, including Indian citizens who are presently residing in the state.