The Nagaland Pradesh Congress Committee (NPCC) came down heavily on former Chief Minister K L Chishi on his resignation from the party and joining the Bharatiya Janata Party (BJP) barely a month ahead of the ensuing Assembly elections scheduled for February 27 next.

In a press statement issued on Monday, the NPCC termed the decision as “very unfortunate”, adding ‘Chishi suddenly started finding fault with the party and blaming everyone else, except himself’.

The NPCC stated that it was the Congress party which had always given him the opportunity despite his ‘prodigal ways’ in the hope that age and experience would ‘sober down his migratory instincts’.

This was Chishi’s third resignation from the Congress. 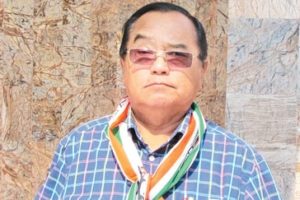 NPCC further stated Chishi’s new found love for BJP-RSS does not entitle him to blame Congress for everything, especially on the Naga political settlement.

The Congress further said many others before Chishi had also joined the NPF-BJP bandwagon on the pretext of bringing an early solution to the Naga political issue, adding, this plea remains a perfect alibi for political defectors to cover up their guilt and shame before the people.

The NPCC also strongly criticized Chishi’s comments that the Congress ‘has no mind to bring about a final settlement to the Naga issue’.

Earlier, interacting with media a day after his resignation on Sunday, Chishi had said he also ‘felt insulted over his inclusion as a member of Coordination Committee of the party for the forthcoming general elections in the State’.

“Only a national party with daring determination can bring about final solution. The BJP which has the guts to initiate and finalize the solution between the Government of India and the Naga people,” he had maintained.

The former Chief Minister and veteran Congress leader on Monday had joined the BJP.

Meanwhile, the NPCC has invited all ‘secular and progressive-minded’ people in Nagaland to join hands with Congress to defeat the combined ‘regional and communal forces’ of NPF-BJP, which had ‘destroyed the State in every sphere of governance’.