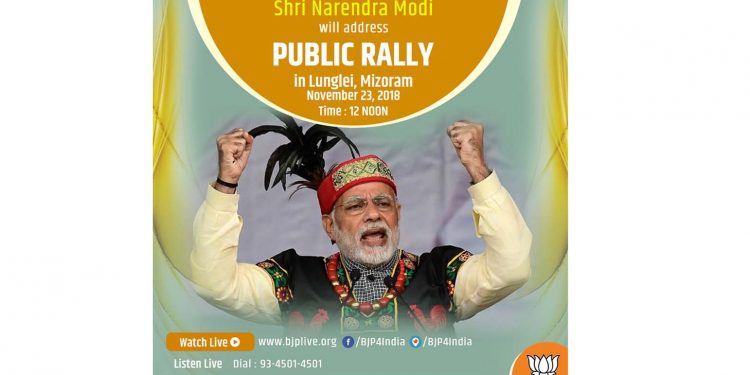 A view of the promo for Prime Minister Narendra Modi's programme at Lunglei in Mizoram. Image - Twitter

The promo of Prime Minister Narendra Modi’s election rally at Lunglei in poll-bound Mizoram on Friday where the PM is seen with a headgear of Meghalaya has drawn criticism from different corners of the Northeast.

The BJP has been criticised on the social media platforms for failing to ‘differentiate’ the unique culture of Mizoram and Meghalaya.

Uploading the image of Modi wearing Garo headgear of Meghalaya on her Twitter handle, Szarita Laitphlang, national media head of Congress and Mizoram campaign in-charge, stated: “What a pity that Narendra Modi has to be shown wearing a Paila- Khasi Tribe & a Kotip – Garo Head Gear for a Mizoram Campaign. BJP claims to respect traditions of the people of Mizoram.”

She also tweeted: “When Aamit Malvya (In-charge of BJP’s national Information & Technology)  & Co. cannot differentiate between the unique culture of Mizoram and Meghalaya.”

When @amitmalviya & Co. cannot differentiate between the unique culture of Mizoram and Meghalaya. @PMOIndia and @BJP4India "the North East" is not a single state – it comprises of 8 beautiful states with their own unique culture!@INCMizoram @MPCCMizoram @davidlms25 pic.twitter.com/4SQPAUg0D5

The Mizoram Congress on its Twitter handle also tweeted: “Such lack of understanding of the diverse traditions of the North East from our Prime Minister! How can one expect him to respect the uniqueness of Mizoram?”

On Friday, Prime Minister Narendra Modi lashed out at the Congress for allegedly ignoring development in Mizoram and said that the Northeast has moved beyond shutdowns, guns and blockades.

While addressing an election rally at Mizoram’s Lunglei, Modi said, “The Northeast has moved beyond guns, shutdowns and blockades. Today everyone is experiencing it from Itanagar to Aizawl, from Kohima to Kamrup.”

Modi also stated: “People in Northeast in many places give me the traditional attire which is called outlandish by the Congress leaders. They speak a lot when they come here but this is their reality. I feel a deep sense of anguish, when I see the leaders of the Congress party abuse the same traditions.”