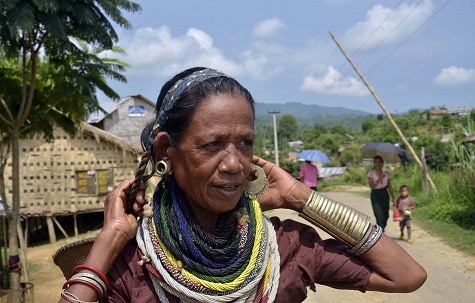 A Bru woman at a refugee camp in Tripura. File photo: Panna Ghosh

The Central Government as well as the Mizoram Government have asked the displaced Bru refugees, lodged at six relief camps in Tripura, to return to Mizoram or else free ration and assistance to them will be stopped from October.

A decision in this regards was taken at a meeting of Ministry of Home Affairs (MHA) officials, Mizoram Home Department and police held in Aizawl on Monday.

Officials of MHA, it is learnt, informed in the meeting that the Centre would stop giving free ration and subsistence allowance of Rs five per head per day to the Bru refugees from October 1 and would close down all the relief camps after repatriation is over.

Notably, only three out of 5,407 Bru families have so far returned to Mizoram during the repatriation process between August 25 and 28.

Two of the repatriated families were re-settled in Kolasib district, while one family was settled in Lunglei district.

The transportation cost for the repatriated families would be borne by the Mizoram Government but no state government officials would be deployed at the relief camps to oversee the process.

According to the quadripartite agreement on July 3 last, over 32,857 Bru tribals would start returning to Mizoram from August. The multi-phase repatriation was scheduled to be completed by September 30.