Some of the dead pigs.

The death toll of pigs in south Mizoram’s Lunglei district has touched the 276-mark, said an official.

Though the cause of pig deaths reported at Lungsen village is yet to be ascertained, a preliminary test has hinted African Swine Fever (ASF) as the cause of death.

Lungsen, a village close to the Indo-Bangla border, is located about 57 km from Lunglei town.

The first pig death was reported in the village on March 21.

Pig samples reached Bhopal on Thursday and results are expected soon, he said.

He said the National Institute of High Security Animal Diseases (NIHSAD) will directly declare the cause of the death after analysis.

According to the official, pig deaths are reported in at least three villages in Mamit district, which shares border with Bangladesh and Tripura.

The actual figure from the three villages is yet to be confirmed, he said.

He added that samples were collected from the three villages in Mamit district for laboratory test.

He also interacted with community leaders and officials there.

The minister expressed regret over the incident and said the state government is making massive efforts to contain the outbreak.

He also visited the burial grounds and inspected the safety measures being taken while burying pig carcasses.

The government has already declared Lungsen village as “infected area” and prohibited movement of pigs in and outside the village.

On Tuesday, the entire Lunglei district was declared as a surveillance zone in order to contain and prevent the spread of the present disease outbreak. 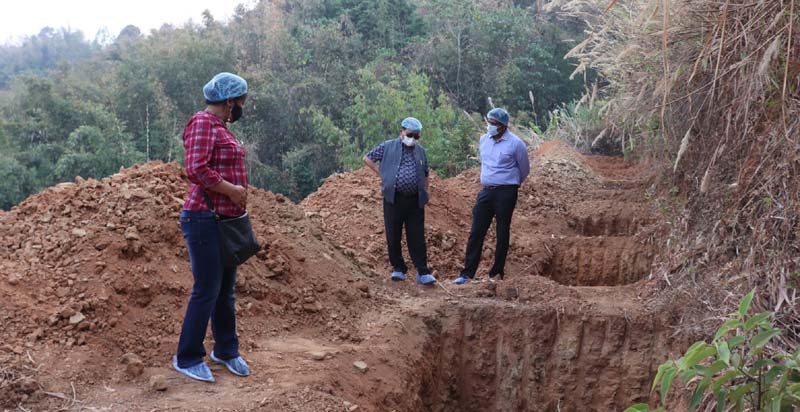 Officials suspect that the prevailing swine disease to be transmitted from pigs and smoked porks imported from neighbouring states and countries.

Mizoram shares inter-state border with Assam, Manipur and Tripura and an international boundary with Myanmar and Bangladesh.

Myanmar also reported the deadly disease of pig in the past.

ASF is a highly contagious and deadly viral disease that affects both domestic and feral swine of all ages.

Experts said it is not a threat to human health and cannot be transmitted from pigs to humans.