Over 700 more people from Myanmar have entered Mizoram 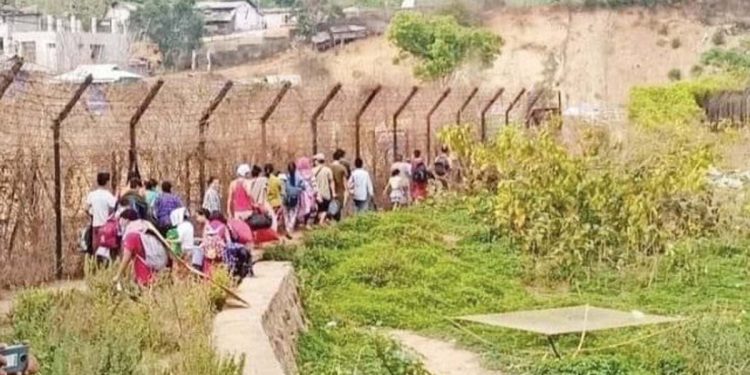 Over 700 more people from Myanmar, mostly civilians, have entered Mizoram in the past few weeks, taking the number of Myanmarese nationals currently taking refuge in the northeastern state to 10,025, a police officer said.

According to the police official the new entrants were mostly civilians, including pregnant women, children and senior citizens, some aged about 90.

Among the 10,025 Myanmar nationals, 22 were officially confirmed to be lawmakers, he said.

Chin state chief minister Salai Lian Luai, who entered the state on June 14, is still taking shelter in the state, he said.

The official said a sizeable number of Myanmarese nationals have already returned to their country.

The state police’s data show that 195 more people from Myanmar have entered Champhai district between June 15 and June 26.

Of the 11 districts in Mizoram, the Myanmarese are now taking shelter in 10 districts and Champhai district alone housed 4,352 Myanmar nationals, the data said.

There are 1,621 Myanmarese people taking shelter at a community housing complex in Aizawl, it said.

Meanwhile, an official, who did not wish to be named, said Myanmarese nationals especially from the Chin state have entered the Indian territory in small batches at a regular interval since the crackdown on civil disobedience movement following the military coup in the neighbouring country in February.

Many of the Myanmarese nationals, who entered Mizoram recently, could be not be prevented even by security forces because most of them were women (some of them conceiving), children and senior citizens, she said.

MC Lalramenga, president of Tuipuiral group of Young Mizo Association (YMA) in Champhai district said 2 makeshift camps are being erected on the outskirt of Zawlsei village, about 20 km from the Myanmar border.

The makeshift camps are being erected by YMA volunteers to give shelter to the Myanmar people on humanitarian ground.

One each refugee camp will be constructed at Farkawn and Vaphai villages by villagers this week, he said.

There are 21 villages within the jurisdiction of Tuipuiral group YMA, which falls under East Tuipui Assembly constituency in Champhai district.

Presently, there are 1,419 Myanmar nationals taking shelter at 20 villages in Tuipuiral area, according to Lalramenga.

Many of the Myanmarese live with their relatives, while some have rented home and supported themselves on daily wages labour, he said.

Besides, a sizeable number of Myanmarese nationals are also currently camping in the bank of Tiau river on Mizoram side of the Indo-Myanmar border as they were asked not to enter Mizoram villages due to the Covid19 pandemic, he said.

Apart from being fed on the food grains they have brought from their native villages, these Myanmar nationals were provided with foods by local NGOs and generous people, he added.