Over 11,000 Bru voters to be deleted from Mizoram electoral roll

A “historic event,” a quadripartite agreement was signed among the Centre, governments of Mizoram and Tripura and Bru associations in New Delhi on January 16 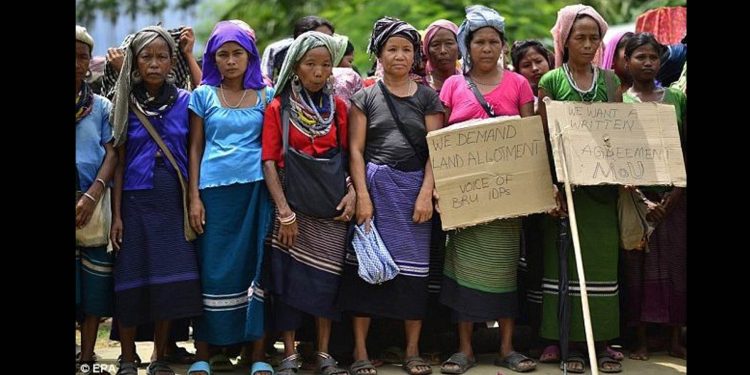 Names of over 11,000 Bru voters from six relief camps in Tripura will be deleted from Mizoram’s voter list.

The conduct is necessitated by the signing of a quadripartite agreement according to which the Bru people will be permanently settled in Tripura, Mizoram Chief Electoral Officer (CEO) Ashish Kundra said.

He said that the names of the Bru voters would be legally deleted from the state electoral roll in accordance with “The Representation of the People Act, 1951.”

“The process of deletion is likely to be undertaken during the next round of roll revision after the Bru relief camps in Tripura are closed down,” he said.

He said that the state government will take approval from the Election Commission and follow the procedure of the representation of the people act to remove the Bru voters from the state voter list.

According to the CEO, the election department is yet to ascertain the actual number of Bru voters to be deleted.

He said that the actual number of Bru voters to be deleted could differ from the existing number in the last roll revision.

Several voters returned to Mizoram during the final round of repatriation conducted in October last year, he said.

He said that the number of Bru voters will be tallied with the state’s home department list.

Kundra hoped that the Bru voters, who failed to return to Mizoram before the quadripartite agreement on January 16, will be included in Tripura state voter list during the next round of roll revision.

According to election officials, there were a total of 12,081 Bru voters in six relief camps in Tripura in the last Lok Sabha poll held in April last year.

During the last phase of repatriation conducted between October and November last year, 1,168 Bru people, comprising of 715 adults and 453 children, belonging to 289 families, have returned to Mizoram.

Elections officials also said that the total number of Bru voters to remove from the state electoral roll will be more than 11,000 although over 700 voters have returned during the last repatriation.

In what may be termed as a “historic event,” a quadripartite agreement was signed among the Centre, governments of Mizoram and Tripura and Bru associations in New Delhi on January 16.

The agreement ended the Bru impasse over a two-decade-old.

According to the agreement, those Bru families, who continue to live in six relief camps after November 30, 2019, will be permanently settled in Tripura.

The Centre will provide rehabilitation and the Tripura government will provide a settlement for the Bru refugees after which all the relief camps will be closed down, the agreement said.