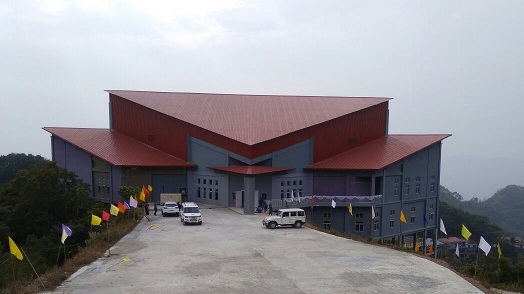 A multipurpose indoor sports stadium, acclaimed as the largest of its kind in Mizoram at Sazaikawn in Lunglei district was inaugurated on Friday by Mizoram sports & youth services minister Zodintluanga.

The Rs 6 crore multipurpose indoor sports stadium at Sazaikawn in Lunglei has a total area of 2484.86 sq. metres and housed indoor combat sports dojo which can cater taekwondo, judo and the likes.

Inaugurating the state of the art indoor sports stadium built by Lushai Engineers, Zodintluanga said,”This sports house is equipped with state of the art sports infrastructure and can host even an international event.”

The Sazaikawn multi-purpose indoor stadium is being built under the aegis of Ministry of Youth Affairs and Sports under Urban Sports Infrastructure Scheme (USIS).