The mortal remains of the leader were buried in a grave specially arranged for him at the community’s sacred place near his mansion. 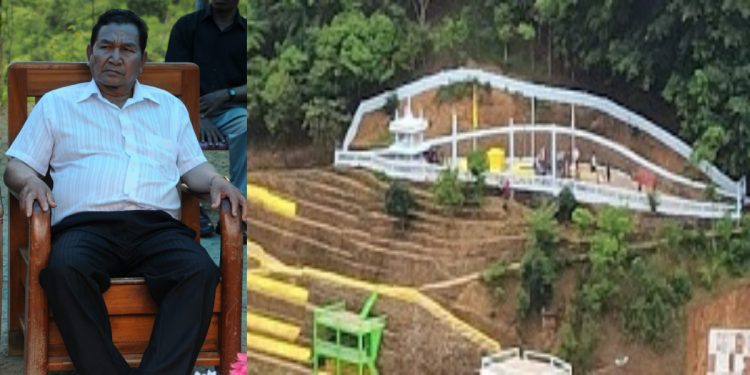 Left: Zionnghaka. Right: The site where Zionnghaka was finally laid to rest.

Four days after he was declared dead by doctors, Zionnghaka (77), well known as Ziona, the patriarch of what is believed to be the world’s largest family consisting of nearly 200 members, has been finally laid to rest at his village in Serchhip district, Mizoram on Thursday, a local leader said.

The mortal remains of the leader were buried in a grave specially arranged for him at the community’s sacred place near his mansion, Chhuanthar Tlangnuam village council president Ramzauva said.

The funeral of the Chhuanthar community chief was held at his residence “Chhuanthar Run” in Bawktawng’s Chhuanthar Tlangnuam under strict Covid-19 protocols, he said.

Members of the Chhuanthar Military Band party have performed during the funeral to give a pious tribute and farewell to the leader, he said.

Enthangpuia, the priest of Lalpa Kohhran Thar, performed the last rite for the leader, while many, including some of his wives, made obituary remarks during the funeral, Ramzuava, who is of the follower of Ziona, said.

Camera, mobile phone and other electronic gadgets were strictly prohibited during the funeral, he added.

Ziona, who headed Lalpa Kohhran Thar, a millennial denomination founded by his uncle Khuangtuaha in 1942, had died in a hospital in Aizawl on Sunday around 3 pm.

He was suffering from diabetes, high blood pressure and other old-age related complications.

He remained unconscious after being treated at his residence and was taken to Trinity Hospital in Aizawl, where doctors declared him “brought dead.”

Trinity hospital director Dr. Lalrintluanga Zahau had said that the patriarch was already dead by the time he was brought to the hospital.

As per Mizo tradition, he was supposed to be buried on Monday.

However, his family and members of the religious community refused to bury him as they were not convinced about his death.

They claimed that the leader regained a pulse after he was brought to his residence and that his body was still warm and not stiff either.

Later, the family declared that the leader passed away finally on Monday around 9 pm, when his pulse stopped beating and body become cold.

Ziona was married to 39 wives, of which 38 are still alive.

He has more than 90 children and over 30 grandchildren.

Nearly 200 family members live in his four-storey mansion located at Baktawng village in Serchhip district about 60 km from Aizawl.

After the death of his father Chana in 1997, Ziona headed the religious sect founded by his uncle.

The total number of his followers is estimated to be about 2,500 belonging to over 430 families.

The religious sect was referred to by the locals as “Chana Pawl” (Chana’s sect/group), while the sect members referred to it as “Lalpa Kohhran thar” (New Church of God).

It is more or less a millennial denomination as it believes in millenarianism.

The religious head is given high respect and treated almost equal to God.

The sect allowed its male members to be polygamous.

Their community is called “Lalruat Chhuanthar ” or Chhuanthar (the new generation established by God). Chhuanthar is sometimes used to refer to the religious sect.