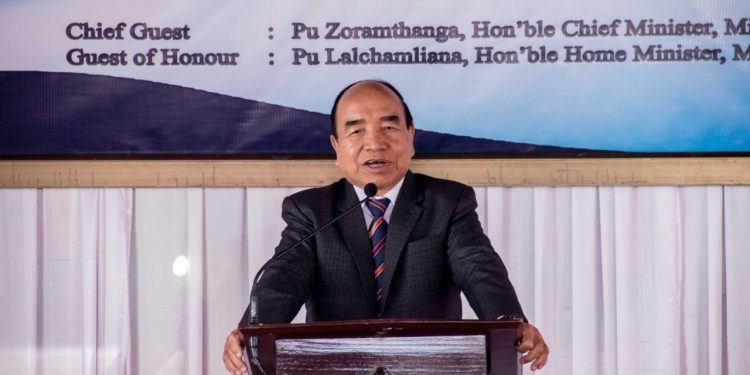 Mizoram chief minister Zoramthanga on Tuesday said his government has been making massive effort to strengthen the state police.

After inaugurating the police headquarters at Khatla locality in Aizawl, the chief minister said his government is making massive efforts to upgrade infrastructure in the state police – be it improving man power, upgrading arms or police uniforms.

He said his government has recently submitted detailed project report (DPR) to the Centre for police infrastructure development.

Earlier, home minister Lalchamliana had said the State Government submitted DPR amounting to more than Rs 400 crore to the Centre for infrastructure development to strengthen the state police.

Calling upon police personnel to abstain from alcohol and drugs, Zoramthanga encouraged them to take it as a challenge and fight the growing menace.

“Even though Mizoram is very small state, it has great opportunity to be a torchbearer in various aspects because of its peacefulness,” he said.

He said changes could be brought in the State if collective efforts are made to tackle big hurdles and difficulties.

Home minister Lalchamliana, who spoke on the occasion, said the government would recruit police constables for the newly created three districts – Saitual, Khawzawl and Hnaththial.

He said the state police could be regarded as one of the best in the country as conviction rate in the State is almost double the national average.

The newly inaugurated police headquarters was constructed as the cost of Rs 1555.79 lakh funded by DoNER ministry.

It was completed in December last year.

A five-storey building has two blocks, 18 officer rooms, 20 staff rooms, 13 store and service rooms, a multipurpose hall, conference hall and library, among others.