A view of the umbrella campaign.

The Assam Rifles troops deployed in Mizoram have continued to extend helping hand to the economically weaker sections of people and those who need support.

The Lunglei Battalion of 23 Sector Assam Rifles under the aegis of Headquarter Inspector General Assam Rifles (East) distributed 15 umbrellas and 30 masks to the economically weaker sections of society and senior citizens in Lunglei district of Mizoram.

The initiative was taken to help people keep a safe distance among themselves and in the wake of upcoming rainy season, the HQ IGAR (East) said in a statement.

The initiative, which was well appreciated by the locals, was aimed at breaking the chain of Covid19 infection to fight the ongoing pandemic.

The locals were urged to use umbrella voluntarily at public places which would automatically ensure social distancing without any conscious effort and will help them to cope up with the extreme weather conditions of Mizoram.

Meanwhile, the Serchhip Battalion of Assam Rifles at the initiative of 23 Sector Assam Rifles under the aegis of Headquarters IGAR (East) conducted a donation drive at Utility Orphanage Home, Serchhip and Zoar Urban Deprived Children’s Home, Venglai in Serchhip on Tuesday.

Amidst the present Covid19 scenario and prevalent restrictions, the Serchhip Battalion is leaving no stone unturned for the betterment of the locals. 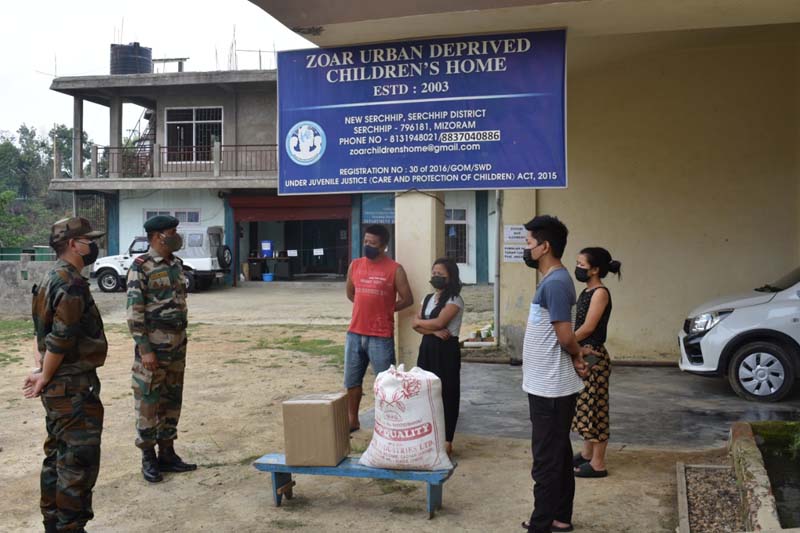 The team also distributed immunity boosters, masks and sanitizers to both the Children’s Home as a philanthropic gesture.

The drive is dedicated towards assisting children to keep their hopes and aspirations intact and also empower them to have a bright future despite the pandemic outbreak.

It is expected that the noble gesture on a part of Assam Rifles and their sincere concern will go a long way in further consolidating the harmonious relations prevailing between the locals and the Assam Rifles.