Mizo Accord is an exemplary peace agreement, ‘model of peace’: Mizoram CM Zoramthanga

Mizoram on Wednesday is celebrating 35 years of signing of the historic Mizo Peace Accord. 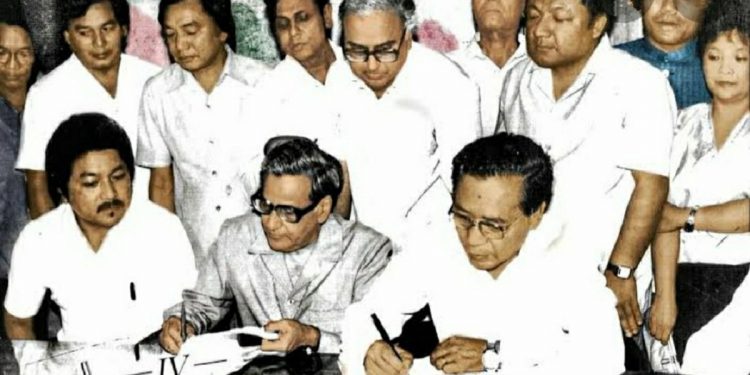 Image of the historic signing of the Mizo Peace Accord on June 30, 1986.

The Mizo Accord has become an exemplary peace agreement and a “model of peace”.

This was stated by Mizoram Chief Minister Zoramthanga.

Mizoram on Wednesday is celebrating 35 years of signing of the historic Mizo Peace Accord.

He said that the Mizo Peace Accord has become so successful that neighbouring states and countries view it as a “model of peace”.

Mizoram CM Zoramthanga said: “The Mizo Accord, signed 35 years ago after years of terrorism, has become an exemplary peace agreement and the neighbouring states and countries also take it as a model of peace.”

He added: “The most successful Peace Accord was signed 35-years-ago on this day, making Mizoram one of the most peaceful states, since then. Let the Peace we enjoy today be a reminder of the past sacrifices and commitment of the Mizo people.”

“We abide by the accord cent per cent. No arms or ammunition were left behind. Everything was handed over to the Indian government, which is also praiseworthy as it has done very well in its part to fulfil the term and conditions of the peace accord,” CM Zoramthanga further said.

“All the requirement we wanted to incorporate in the constitution was added through Article 371 (G). The union government even awarded us with a peace bonus to the tune of over Rs 182 crore,” the Mizoram Chief Minister added.

The Mizo Peace Accord was signed on June 30, 1986 between the Centre, the Mizoram Government and the MNF (Mizo National Front), which was then an insurgent outfit.

It was signed by Laldenga for MNF, RD Pradhan – Home Secretary for the then Government of India and Lalkhama – Chief Secretary of then Mizoram Government.

It is remarked as the most and only successful peace agreement in India after its independence from British Empire in 1947.

Following the signing of the Accord, on August 7, 1986, the Centre approved statehood for Mizoram.

Mizoram became the 23rd state of the Indian Union on 20 February 1987.

Current chief minister of Mizoram, Zoramthanga was a member of the then insurgent outfit MNF.

After major uprising through peaceful means, the group took up arms and involved in underground activities between 1966 and 1986.

After coming to over ground in 1986, the MNF was converted into political party and is now a recognised regional or state party.

The MNF was founded by former Mizoram chief minister late Laldenga to protest against the inaction of the Centre towards the famine situation in the Mizo areas of the Assam state in late 1950s.