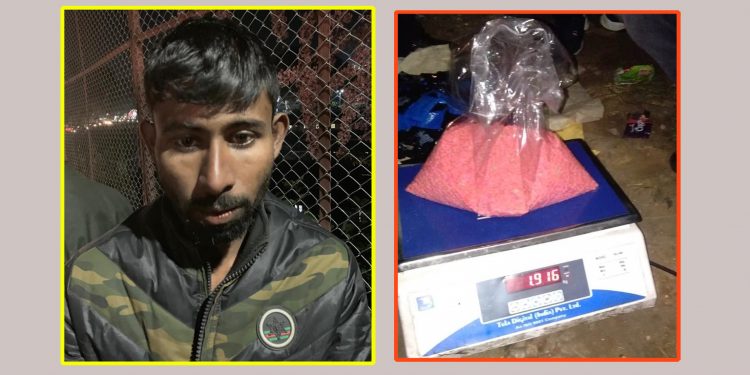 Yaba tablets weighing just over 1 kg was seized at Umshyrpi bridge in Shillong on Thursday by a joint team of the Intelligence Unit of  Assam Rifles and Anti Narcotic Task Force (ANTF) team of Meghalaya Police.

The ANTF team received a specific input that one person, Pinak Das, would deliver a consignment of Yaba tablets in Shillong.

“Das, however, kept on changing the delivery point from Upper Shillong to Sohra and again back to Shillong,” police said.

“After the daylong cat and mouse chase, Das was finally caught near Umshyrpi bridge at around 5:30 pm,” police added.

On interception and search of his vehicle, a plastic bag containing the tablets was recovered.

The quantity seized in the presence of independent witness came out to be 1.915 kilograms.

Police said that Pinak Das is merely an agent of a bigger group who is headed by one Bashkembor Nongbet who handed over the consignment to Pinak Das on the curve of Shillong Peak.

“Bashkembor Nongbet managed to give the police a slip taking advantage of the darkness,” police said.

“His house was raided in the middle of the night but his sister did not tell the police about his whereabouts,” East Khasi Hills SP Claudia A Lyngwa said.

“He will be nabbed soon,” the SP added.

The SP further praised the efforts of the entire district force that was a part of the daylong operation.