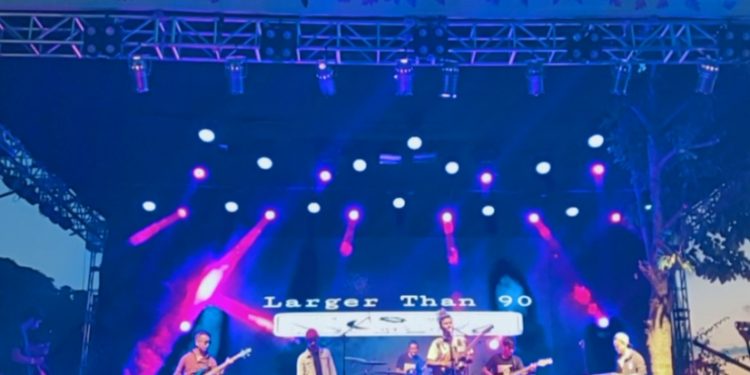 The two-day Shillong Autumn Festival started off on Saturday.

The festival is being held at the Water Sports Complex, Orchid Lake Resort in Umïam.

The inauguration was marked by spectacular performances from local bands Larger Than 90 and Light After Dark.

‘Opus Production’ organized the festival which will conclude on Sunday.

Prior to ecstatic performances from the bands, cultural troupes from the three tribes of Meghalaya – Khasi, Jaiñtia and Garo performed the traditional dances which marked the opening of the two-day festival.

Larger Than 90, a novice punk rock band from Jowai town, in West Jaiñtia Hills district enthralled the audience at the start of the show.

Light After Dark, a band of visually impaired musicians, woke up the unexciting crowd with their blissful performances including a Hindi song.

The 11-month old Larger Than 90, had also emerged winners in the Rhythm of Meghalaya, a beat contest organized by ‘Opus Production’ for musical bands last week in the run up to the festival.

Tourists both domestic and foreign, and locals alike, thronged the Umïam Lake as the festival moved on till late night, while many parents brought their kids along.

The festival offers visitors a wide array of entertaining events with cultural programmes, fashion show and musical concerts on the scene.

The two-day event also features Mumbai-based rock band, Indus Creed and an international DJ from the US, besides renowned local bands like Snow White and Summersalt.

The Shillong Autumn Festival was revived in 2018 after the festival stopped for five years.

The festival made a successful comeback last year when the new organizers ‘Opus Production’ took over from the previous organizers, the Meghalaya Tourism Development Forum.