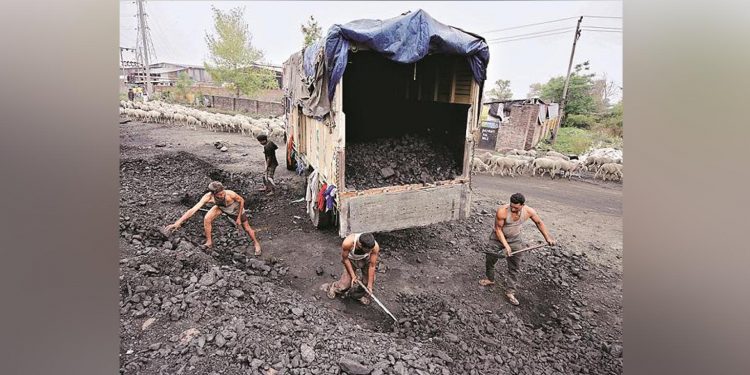 The National Green Tribunal (NGT) committee on Thursday has approved auctioning of 2 lakhs metric tons of extracted coal in Meghalaya.

The Meghalaya government has claimed that there are 32,56,715 lakhs metric tons of extracted coal and the Supreme Court in its order passed on July 3 last year directed that the entire extracted coal stocks already identified be handed over to the Coal India Limited for the purpose of disposal/auction as per the rules the CIL
and mode and manner formulated by the NGT appointed committee.

Speaking to reporters on Thursday, Chief Minister Conrad Sangma, who holds the mining portfolio, informed that for now, the NGT committee has approved the auctioning of only 2 lakhs metric tons.

“It is up to the NGT committee that worked out and took the decision,” he said.

“The NGT committee felt that on a pilot basis, it will take up 2 lakh metric tons first, and see how it goes before taking a further decision,” he added.

He said that environmental norms will be followed in the auctioning of coal, and the price will be as per the rates of the Coal India Limited (CIL) and the Metal Scrap and Trade Corporation (MSTC) is an e-auction platform.

In order to transport this auctioned coal, different temporary depots will be set up and strict environmental norms will be followed in every depot during the auction and transportation.

“There will be several checks and balances like the presence of CIL officials, full-proof security measures like the QR Code, hologram, four copies of challans, fugitive ink ensuring a full proof mechanism is in place,” Sangma said.

“There will be transparent online auctioning at the all India level by the MSTC Ltd platform, which will lead to obtaining the highest price for the coal of the coal owners,” Sangma added.

He was replying to a query regarding the steps taken ensuring that there is no illegal transportation of coal following the NGT approval to auction 2 lakhs MT of extracted coal.

To a question, if the quantity of 32,56,715 lakh metric tons of extracted coal projected since July last year is still available now in view of the alleged illegal transportation of coal in the state, the chief minister said the figure is still the same.

“The assessment was done by various deputy commissioners, and the figure remains,” he said.

The chief minister also said that once all the 32 lakhs metric tons of coal is auctioned, the state will get revenue around Rs 500 crore.

“We expect roughly about Rs 20 crore in term of revenue for the state (from 2 lakhs MT) but that will be determined by the auctioned price,” Sangma said.

“Out of the entire amount of bidding, 10 per cent of the bid value will go to the CIL,” Sangma added.

“After all other expenditures to ensure transportation and the bidding process takes place, and also the
royalties are deducted, the rest of the money will be transferred to the coal stock owners,” he added.

Sangma also thanked the NGT committee and its chairman, Justice BD Agarwal, CIL officials, MSTC Ltd, and officials of the state mining and geology department for having worked tirelessly in the last seven months and the results were all the hard work that has been put in by these different organizations.

On illegal extraction or transportation of coal, the chief minister said that the government will take action under Section 21 of the MMDR Act, 1957.

“The district administrations and police have been warned and given necessary instructions to ensure that no such illegal transportation takes place,” Sangma said.

“At the same time we have warned all individuals that any kind of illegal extraction or transportation of coal, the government will take action under section 21 of the MMDR Act which is now very stringent,” Sangma reiterated.

“Earlier the action used to be based on different laws but now the MMDR act is very strong and under section 21 it is five years imprisonment if anybody is found guilty (which was not there earlier),” the chief minister warned.